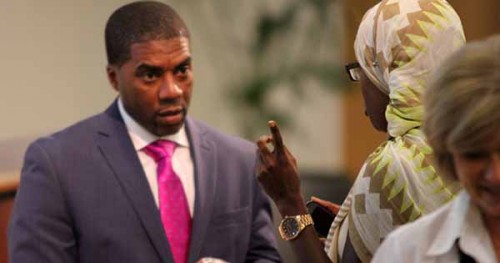 Nationwide (BlackNews.com – Devin Robinson, a black business & economics professor, had strong words recently for the attendees of the Dallas Black Chamber of Commerce Annual State of the Union. He said, Some of us have good intentions but not good insight. He was referring to the way some leaders go about leading blacks out of the state of despair.
Robinson, a former National Action Network Atlanta Chapter President, has been doing work with community movements for over a decade. However, he is also a notable businessman and professor who believes capitalism is the key to the elevation of blacks.
While speaking at the Womens Foodservice Forum Entrepreneurial Boot Camp, he stated, “We must buy our freedom with the Masters money.” He was explaining to the room full of minorities, the importance of making your employer the first investor of their businesses.
Too many protests and boycotts
His approach is that there are too many protests and boycotts from action waged against the blacks only because weve entrusted fairness in the hands of people outside of the black community. He went on to say, I think we put too much energy into the effects rather than the cause. The cause is that we dont control enough purse strings to ensure we are treated fairly. For example, if we invested more in movies, sat on the councils and boards, we wouldnt have a problem getting Oscar nominations and we wouldnt have this unjust pressure for Chris Rock to not host the 2016 award ceremony.
The Black Lives Matters movement was birthed from the long list of frequent police brutality and killings of unarmed black men, who often pose no threat. Robinson believes black lives not mattering is connected to the direction weve been told to march in. He said, Civil rights leaders fought for mass integration. I think that was a mistake. We only needed government-controlled facets of society integrated (because they are run by public dollars), not necessarily private businesses. Though the acts were brave and noble, lunch counter sit-ins allowed us to now dine at the finer better ran non-black restaurants. Over time, we simply abandoned the hard work we put in to establish our own private businesses. Integration was a shortcut to get out people the goods and services they needed, as opposed to building our own infrastructure.
A new black agenda
Robinson now runs a business institute with a black agenda. With a team of other entrepreneurs, he runs programs that teaches aspiring entrepreneurs how to start and run their own businesses. He said, There are too many blacks that try to cut corners in business. They chase the passive income of multi-level marketing, the low expense of home-based, car-based or online businesses and dont understand the leveraging potential of owning a physical business. Yes, it is a harder approach but thats what our program exposes black entrepreneurs to… How to start and run credible and sustainable businesses with much greater income potential than the other models I mentioned.
Professor Robinsons book, Rebuilding the Black American Infrastructure: Making America a Colorless Nation, explains his approach to how blacks can begin to matter in America. He continues to support the work of movements aimed at bringing relief to the black community as he simultaneously manages his businesses and runs his institute on a full-time basis.
He said, There are 5 things blacks must do: attend a black-centered college, own a business, work for a black business, patronize a black business and have an account with a black bank. We must do these if we expect police to stop killing blacks in America. From Oscar snubs to Oscar Grant, we continue to be a dismissed people.
Learn more about Professor Devin Robinson and his institute at www.UrbanBusinessInstitute.com