The likelihood of incarceration for minorities is twice as high as that of similarly situated whites, and sentences up to five times as severe, inevitably leading to correctional institutions populated with relatively more minority prisoners. — Racial Discrimination in the Criminal Justice System: An Assessment in the Empirical Evidence, NY African American Institute 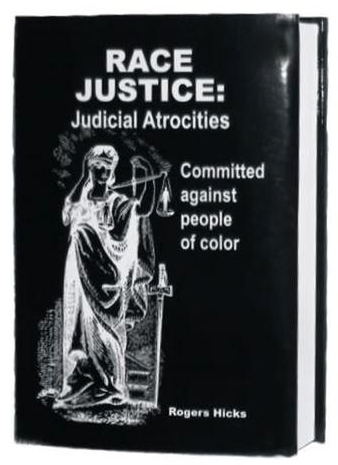 Nationwide (BlackNews.com) — The recently published Race Justice: Judicial Atrocities Committed Against People of Color by Rogers Hicks is sobering reading for individuals from every ethnic and socio-economic background.This compilation of documents, including official court documents, numerous case studies, and the damning 1991 report of the New York State Judicial Commission on Minorities, outlines how judges, prosecutors, and police officials blatantly abuse their authority, suborn police perjury and utilize other illegal practices and procedures to deprive minorities of their constitutional rights under the guise of judicial process.Hicks, an accomplished jailhouse lawyer who served time in New Yorks infamous Attica State Prison in the 1980s, wrote the book to bring to light procedures that the judicial system uses to perpetuate inequality and that result in statistics such as the following: minority imprisonment rates in New York are more than ten times the imprisonment rate for whites, yet minorities make up only twenty-two percent of the state population.

For more information about Race Justice: Judicial Atrocities Committed Against People of Color or to contact the author for media commentary, email rogershicks@yahoo.com or visit www.cbpm.org/racejustice.html
About the Author:
Rogers Hicks won a victory for inmates and jailhouse lawyers in the precedent-setting case Hicks v James. Since his release from prison in 1991, he has worked as a paralegal with private law firms and at Prisoners Legal Services of New York. In addition to appearing in lower state and federal courts, he has argued twice before New Yorks highest court, the United States Court of appeals for the Second Circuit, and is credited with numerous precedent-setting court decisions affecting civil rights and liberties. He also drafted and presented the original Petition to the United Nations Committee on the Elimination of Racial Discrimination on June 4, 1993.

Black Author/Thinker Reveals the Truth About 18 Controversial Subjects in Her New Book, “Psst: Please Somebody Speak The Truth”