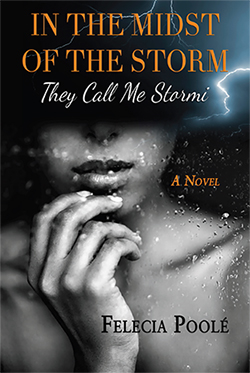 Los Angeles, CA (BlackNews.com) — Felecia Poole, Los Angeles-based author, debuts her new book, In The Midst Of The Storm: They Call Me Stormi. This is a riveting story of a young girlâ€™s journey through love, sex, and betrayal, and her fight to keep her sanity and the consequences of trying to become an adult too fast. Many teens are forced to grow up too fast trapped between being a teen and trying to be an adult, many starting with being a latchkey child because both parents are required to work.

The authorâ€™s characters are skillfully developed, and you are walking in their shoes – you are there with them as they blunder through life. You are reminiscing on your own life as a teenager and a parent. After rewinding the tape of your own past, one canâ€™t help but to understand that their lives could have ended up as some of the youth characters in this tale. This tale will cause many parents to take off the blinders and pay more attention to their teens and their associates. You will see how family values and spiritual values play out in teens when confronted with tough decisions that they are faced with daily.

Stormi, the protagonist, on the day she was born a mighty storm raged. Her father nicknamed her Stormi. She was born at the speed of a bowel movement, She could have died during her birthing but her mother saved her from fallen into the toilet water. Had she cheated death, had her survival changed the course of her destiny or did her nickname set the stage for her roller-coaster life? This was the making of a mad teen.

Stormi was trapped between a spirit of good and evil, and having a mind of a teenager and a body of an adult woman – and she worked it all to her benefit. Obeying the evil voice placed Stormi in dire situations. However, remembering and reciting the prayers that she heard her mother pray enabled her to escape on many occasions.

Stormi and her teenage friend Shannon shared the kind of friendship that most never achieve in a lifetime. But something awful happened to Shannon, and Stormi was left with a dilemma involving saving her friendâ€™s life, not being a snitch, and staying true to the game – a burden too grand for a fourteen-year-old to bear.

Every parent and teenager must read this cautionary tale. Teens will decipher the traits of a true friend and the danger in trying to become an adult too fast, the price of following the crowd and hanging with the friends that have a different value and belief system. Parents will truly see how a spiritual and a prayerful lifestyle can make a great impact in a childâ€™s life when confronted with tough life decisions. LOVE… SEX… BETRAYAL…