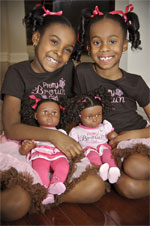 Nationwide (BlackNews.com) — Empower a girl, empower a world. During Black History Month, a Detroit Metro based company is pushing for a national movement. Pretty Brown Girl is asking all girls and women across the United States and around the world to celebrate themselves, families and friends. This is a great way for brown girls of all ages, cultures and ethnicities to empower themselves and boost their self-confidence.

On Saturday, February 25, 2012, Pretty Brown Girl (PBG) is encouraging families, youth mentoring groups, civic organizations and churches locally and nationally to embrace the differences among their youth. It is important for girls to understand that no matter what their skin tone they are beautiful inside and out.

The Pretty Brown Girl collection includes the book, My First Day of School and the PGB pledge; which encourages girls to Dream Big. There are also T-shirts, bags, other accessories and the anticipated Pretty Brown Girl Doll; available this Spring. Now girls and women are proudly describing themselves and others as pretty brown girls with this simple but powerful message.

In August 2011, Sheri and Corey Crawley launched Pretty Brown Girl, LLC in Detroit at the Charles H. Wright Museum of African-American History. The couple was inspired to start the company by their daughters Lailia and Aliya. When the family relocated to a Detroit suburb, Sheri observed changes in her oldest daughter’s behavior. Laila lost her bubbly personality and became more withdrawn and timid during school hours. She began to make comments that she wanted her hair to look like that of her classmates as opposed to her own beautifully textured hair. When Sheri began sharing her observations with other moms, she realized that different families were having similar experiences. Those incidents combined with a news report, that showed children of all ages and backgrounds still have negative connotations of people with darker skin tones, made Sheri and Corey realized there is a need for positive messaging to girls around the world.

The Pretty Brown Girl collection can be purchased online at www.prettybrowngirl.com.