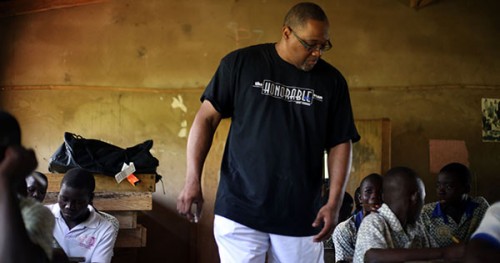 Atlanta, GA (BlackNews.com) â€“ It has been nearly 20 years since the historic Million Man March in October of 1995. Much has transpired over this time with the nations Black Men and Families. Recent Pew research indicates that black fathers are engaged more than any other population of fathers in the day-to-day activities and rearing of their children. “We have a long way to go, however we have made some significant progress in challenging and disproving the societal view of black fathers,” says Kenneth Braswell, Executive Director of Fathers Incorporated.

Beginning the first week in August and up until the march, the Atlanta based not-for-profit will encourage at least 20,000 black fathers across the nation to sign the Honorable man pledge on its website (www.millionblackfathers.com) in order to represent the new 21st Century dad at the October 10th, twentieth anniversary celebration of the Justice or Else Million Man March in Washington, DC.

“In the first couple of weeks (pre-launch) we already have signatures from fathers in 33 cities in 13 states presenting nearly 100 children. This is a clear indicator that black fathers understand both the significance and importance of having their voices represented on the platform of this historic and memorable occasion,” says Braswell.

For eleven weeks leading up the march, activities will include a comprehensive social media campaign to generate conversation around the principles of the “Honorable man”, to include “word of the week,” video of the week and contest challenges to sign up fathers to take the pledge. The hashtag #honorableman will be used to capture the excitement created by the effort.

FI is also proud to announce its National Advisory Council. These progressive thought leaders from around the country will advise and assist the development and implementation of the campaign. “The Campaign for Black Male Achievement believes that Black men are assets to their families and communities, particularly as caring, loving fathers in the lives of their children. Thats why were are thrilled to partner with Fathers Incorporateds Honorable Man campaign to encourage 20,000 Black fathers to be engaged in the upcoming 20th anniversary of the Million Man March. We envision that this campaign will revive and encourage thousands of Black fathers to elevate their impact in the lives of their families and community, says Shawn Dove, CEO, Campaign for Black Male Achievement.

The campaign launched on Monday, August 3rd. For more information toÂ support or promote the campaign, send an email toÂ info@millionblackfathers.com. You can also join them on TwitterÂ @millionblkdads, Facebook atÂ www.facebook.com/millionblackfathers andÂ their website atÂ www.millionblackfathers.com
About Fathers Incorporated
Fathers Incorporated is a 501(c)3 not-for-profit (S) corporation and is dedicated to strengthening the community and family infrastructure by encouraging and enabling the positive involvement of fathers in the lives of their children.