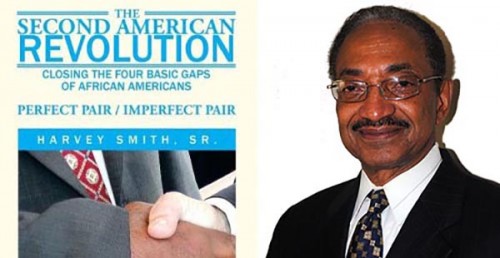 Nationwide (BlackNews.com) â€“ Â The esteemed college professor, Harvey Smith, Sr. has published a book titled The Second American Revolution, Closing the Four Basic Gaps of African Americans, Perfect Pair Imperfect Pair. In the book, Professor Smith describes the four basic gaps that exists when comparing the economic achievements of African Americans with White Americans. Professor Smith identifies, for the first time, the four basic gaps which he refers to as the BINE GapÂ© which includes gaps in the following areas: business; income; net worth; and education.The book was published in 2014 during a time of great racial tension as relationships between the African American community and police departments deteriorated substantially. During this time of concern in which many people were searching for answers that could lead to a better racial environment, Professor Smith believes he has the answers to the problems as he proposes, in his book, ways in which African Americans can improve their plight and reduce the four basic gaps. Professor Smith researched the 2010 United States census and found some surprising data that suggests the economic status of African Americans is not good and in fact may be deteriorating over time. Professor Smith indicated that mathematically it is impossible for the four basic gaps to be closed given current policies in place in America today. He proposes solutions that will go a long way towards closing the gaps by using all stakeholders in America including leaders in: business, politics, government, entertainment, and sports. He believes this coalition is needed in order to bring substantial improvement to the average African American going forward. He also provided a self-help component that deals with such key topics as: personal budgeting; personal financial management; wealth building; and credit management.

In the book, Professor Smith provides detailed statistics on other basic gaps in business and in education. Educational gap information is provided in the book in the areas of SAT performances and a comparison of the substantial gap that exists in college endowments. White American educational institutions have unbelievably larger endowments than Historically Black Colleges and Universities (HBCUs). Thus, there is a huge gap in available resources at the HBCUs.

Professor Smith believes that now is the time for positive changes in America for the benefit of all Americans.