Letters to Editors
From: AFSCME 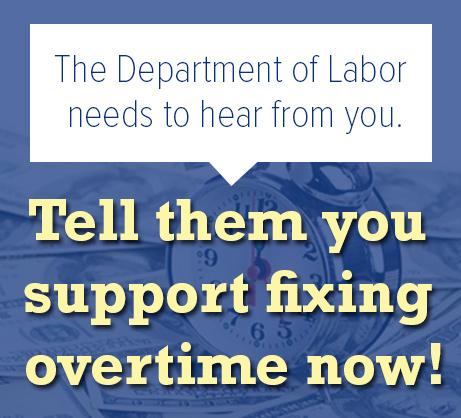 Working 9 to 5. Taking care of business. Working for the weekend. The 40-hour workweek is ingrained in American culture.
Yet Americans are working longer hours and still not getting ahead. What’s going on?Â  Millions of workers are suffering from unpaid overtime.
The Department of Labor released an overtime rule change proposal that would fix this problem by raising the base pay for overtime eligibility.
In order for this overtime change to take effect, the Department of Labor needs to know that the public supports it. Tell the Department of Labor that you stand by their proposal so they can make it official.
Overtime pay used to benefit many working people. In 1975, more than 60 percent of salaried American workers could earn overtime pay. Today, only 11 percent of salaried workers are eligible.
Overtime laws have not been updated for decades to adjust for inflation. Today, you are only automatically eligible for overtime if you make less than $23,660 after working 40 hours a week.

By increasing the salary cap for inflation to an expected $50,440, approximately 11 million more workers would qualify for overtime pay next year.

Sadly, most big businesses are already demonizing the rule change, just as they did to efforts to raise the minimum wage. They argue for the same tried-and-failed, trickle-down policies that have led to record levels of income inequality.
Corporate business interests are fighting the rule change and will submit their own comments. That’s why it’s so important that the Department of Labor hears from you.
Tell the Department of Labor that you stand by its proposal to extend overtime pay for more working Americans.

Itâ€™s the right thing to do, for our families and for our economy.

Thank you for all that you do,