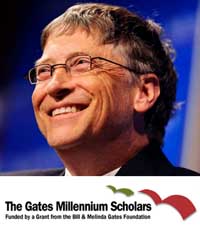 Nationwide (BlackNews.com) — The deadline is fast approaching for the 2014 Gates Millennium Scholars (GMS) Program. Every year, the program selects 1,000 talented minority students to receive a good-through-graduation scholarship to use at any college or university of their choice. The program provides scholars with personal and professional development through our leadership programs along with academic support throughout their college career.

Administered by the United Negro College Fund, the program was initially funded by a $1 billion grant from the Bill & Melinda Gates Foundation. Since 1999, it has funded the education of more than 16,000 students, awarding them more than $614 million dollars to pay for tuition, fees, books and housing.

Individuals selected as Gates Scholars will receive funds in an amount to be determined based on their financial need. The amount determined will be based on the cost of tuition, fees, books and living expenses for the 2013-2014 academic year, as well as the availability of grants and other scholarships reported on the financial aid award letter. The average scholarship award in the 2000-2010 academic years was $11,000 per student.

For more details and/or to apply to the Gates Millennium Scholars Program, visit:
www.scholarshipsonline.org/2012/08/the-gates-millennium-scholars-program.html

To search hundreds of other 2014 scholarships, visit:
www.ScholarshipsOnline.org