“Oscar Micheaux: A Self-Made Man” Profiles the Struggle and Success of the First Great Black Filmmaker 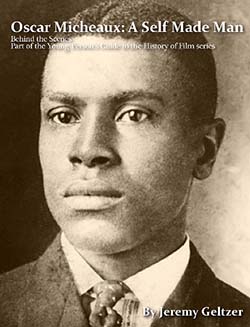 Los Angeles, CA (BlackNews.com) — Oscar Micheaux: A Self-Made Man, a new release from The Hollywood Press, brings the story of America greatest African American filmmakers to life. The book is designed for everyone who loves the movies and would like to introduce young audiences to the history of film. The illustrated soft cover book provides insightful glimpses into the lives and work of African American filmmakers, memorable screen icons and less familiar figures.

Written by Jeremy Geltzer, a film professor, entertainment lawyer and author, the book is targeted to middle grade readers ages 9-13. Oscar Micheauxâ€™s life vividly demonstrates the American Dream. The son of ex-sharecroppers, Micheaux worked odd jobs from Pullman Porter to Dakota homesteader before becoming one of the first black filmmakers. He made films outside Hollywood that were tailored to black audiences using his own stars. Among Micheauxâ€™s discoveries were Paul Robeson and Robert Earl Jones, father of James Earl Jones.

In less than 30 years Micheaux directed over 40 films. While the director has been passed over in many film history books, his story remains inspirational. Micheaux believed in his dream; he struggled to share his message of self-reliance and betterment. Other chapters in the book chronicle the African American communityâ€™s hard fought battle for recognition in Hollywood, from Sidney Poitier to Octavia Spencer and other black directors from the silent era to Spike Lee and Lee Daniels.

Oscar Micheaux: A Self-Made Man is available for $5.39 from Amazon.com and $3.99 e-book at the Apple e-bookstore. More information is available at www.Hollywood-Press.com and on Twitter @HollywoodBabel.