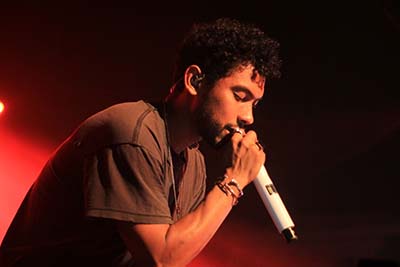 Hollywood, CA (BlackNews.com) â€“ The NBA All Star game has long been a spectator celebration for sports enthusiasts, celebrities, and players from all over the world to unite over the love of the game of basketball. This season NOLA fans were not only cheering for the hoops, but also for Cliffhanger Productions All Star live music line-up at the Howlinâ€™ Wolf (located at 828 South Peters Street, New Orleans, LA 70130) February 14th-16th, 2014. Clifton Dutton, founder of Las Vegas based Cliffhanger Productions, was the powering agency behind these past three nights of rhythmic revelry. Diddyâ€™s REVOLT Cable Network was streaming live on the scene to catch it all, both on stage and backstage.

Hip-Hop Superstar, the â€œREALâ€ Ricky Rozay, kicked off the concert series with DJ Khalid on Friday night, in promotion of his sixth studio album â€œMastermindâ€, set to release on March 4th by the Maybach Music Group, Slip-n-Slide Records and Def Jam Recordings. Hosted by Miracle Watts, Grammy-Award Winner Drake and Grammy-Nominated Keyshia Cole partied until the wee hours of the morning.

All eyes were on Saturdayâ€™s stage with R&B Grammy-Award Winner Miguel and #1 Billboard Recording Artist/Rapper T.I. Sultry, Pop Recording Artist Darnaa opened up for the shared bill, debuting her new single â€œCowgirlâ€ in honor of her upcoming March 2014 album release party at SXSW in Austin, Texas.

In response to All Star Weekendâ€™s shows and their turned up triumphs, Mr. Dutton recently stated “I want to thank the Howlinâ€™ Wolf and all the R&B and Hip Hop fans for helping Cliffhanger have a safe and successful event. All of the artists put on a hell of a show! Thank you to the city of New Orleans and the NBA. See you next year in New York!â€

Future Cliffhanger Productions plans include a loud and proud presence at the upcoming SXSW 2014, where they will be showcasing a 15,000 square foot tent with a 40-foot stage — the second largest at the festival. Cliffhanger will be promoting Recording Artist Darnaaâ€™s album release, amongst other acts TBA. They will also have a promotional tent next to MTV for their sponsors.

Following the lead of its CEO, who at one point of time was the number one sales manager in the US auto industry, Cliffhanger along with its employees and affiliates devote numerous hours to their clients to ensure the highest level of customer service available and considers themselves unmatched in today’s industrious entertainment circle. More information for Cliffhanger Productions can be found on their website www.CliffhangerLV.com

Photo Caption: Miguel at Cliffhanger’s All Star Weekend Concert Series at the Howlin’ Wolf in NOLA