Available on VOD and Digital July 28

Coming to Blu-ray and DVD August 4 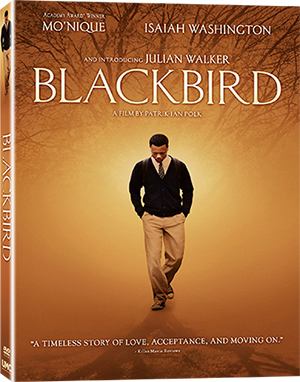 The film evokes a lovely spirit in every capacity, from its performances to its look to Polks lyrical direction — Houston Chronicle

Los Angeles, CA (BlackNews.com) â€“BLACKBIRD, the provocative film acquired by RLJ Entertainment (NASDAQ: RLJE) will be available on VOD and Digital on July 28, 2015 and Blu-ray and DVD on August 4, 2015.

BLACKBIRD (www.blackbirdthemovie.com) tells the story of seventeen-year-old Randy (Julian Walker), a devout Christian who is hiding a secret inner struggle – the denial of being gay. Since his father (Isaiah Washington) left, Randy takes care of his emotionally disturbed mother (MoNique) and is the kind of friend all of his classmates can depend on. It is not until he opens himself up to love that he discovers that becoming a man means accepting who you really are.

ABOUT RLJ ENTERTAINMENT
RLJ Entertainment, Inc. (NASDAQ: RLJE) is a premier independent owner, developer, licensee, and distributor of entertainment content and programming in primarily North America, the United Kingdom, and Australia. RLJE is a leader in numerous genres including feature films and urban with distinct content via its owned and distributed brands such as Acorn (British TV), Acacia (fitness), Athena (documentaries), and Madacy (gift sets). These titles are distributed in multiple formats including broadcast television (including satellite and cable), theatrical and non-theatrical, DVD, Blu-Ray, digital download, and digital streaming. Through Acorn Productions, its UK production arm, RLJE owns all rights to the hit UK mystery series Foyles War and is developing new programs. RLJE owns 64% of Agatha Christie Limited, which manages the intellectual property and publishing rights to some of the greatest works of mystery fiction, including stories of the iconic sleuths Miss Marple and Poirot.

RLJE leverages its management experience to acquire, distribute and monetize existing and original content for its many distribution channels, including its branded digital subscription channels, Acorn TV, AcaciaTV, and UMC – Urban Movie Channel, and engages distinct audiences with programming that appeals directly to their unique viewing interests. Through its proprietary e-commerce web sites and print catalogs for the Acorn and Acacia brands, RLJE has direct contacts and billing relationships with millions of consumers. For more information, please visit www.RLJEntertainment.com.

ABOUT UMC – URBAN MOVIE CHANNEL
UMC – Urban Movie Channel (urbanmoviechannel.com) launched in November 2014. UMC is a premium subscription-based streaming service exclusive to RLJ Entertainment, Inc. and it is devoted to the acquisition of feature films, comedy specials, stage plays, documentaries, music, and entertainment for African American and urban audiences, with plans to move into future development and production. New titles are added weekly in addition to the more than 150 titles in our UMC library, which include live stand-up performances featuring Academy Award Â® winner Jamie Foxx and comedic rock star Kevin Hart; documentaries Dark Girls and I Aint Scared of You: A Tribute to Bernie Mac; feature films All Things Fall Apart starring Grammy Award Â® winner 50 Cent and directed by Mario Van Peebles, The Last Fall starring budding superstars Lance Gross and Nicole Beharie, and The Colony starring Laurence Fishburne; and stage play productions including What My Husband Doesnt Know by David E. Talbert, who is described by Variety as the acknowledged kingpin of urban musicals. UMC is available on the Roku platform and subscribers can access UMC from their tablet, phone and laptop to watch movies from todays most recognizable talent available on demand and commercial-free. Please visit www.urbanmoviechannel.com.