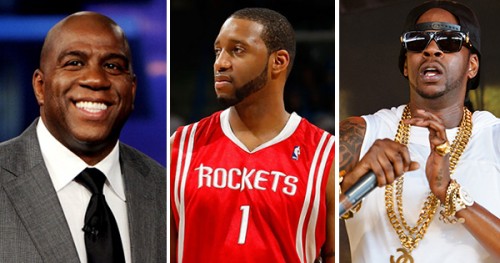 The partnership provides a huge opportunity to use our voices to support the efforts of the nations 105 HBCUs to build awareness and attract talent,” said seven-time NBA All-Star Tracy McGrady. “HBCUs are a cornerstone of our community, having graduated some of the most notable African Americans across the spectrum including medicine, technology, the arts, sports and beyond. With more African Americans entering college today than ever before, it is imperative that we do all that we can to support HBCUs in every way as they continue to provide a high quality education.”

ASPiRE delivers enlightening, entertaining and positive programming to African Americans with a diverse slate, including live and encore HBCU football and basketball games featuring member schools of the CIAA and SIAC conferences.

Through this unique collaboration, ASPiRE will continue to capture the positive lifestyle on HBCU campuses and present the authentic and aspirational images from the HBCU experience to our viewing audience, said ASPiRE Senior Director of Business Affairs and Development Melissa Ingram. Providing positive programming for African Americans is at the core of who we are, and this partnership is an extension of that mission.

“This partnership perfectly aligns with our mission of servicing and creating positive awareness of HBCUs,” added Rod Chappell, CEO and Executive Director of HBCU Direct. Collectively, HBCUs need more support in marketing and awareness to increase revenues through enrollment and fundraising. The statistics regarding increased college enrollment for African American students are encouraging, and we have to do all that we can to make sure that HBCUs are strong benefactors of this increase. The U.S. Department of Labor’s Bureau of Labor Statistics (BLS) recently reported that among 2014 U.S. high school graduates, 70.9 percent of African American graduating high school seniors had enrolled in college by October, up from 59.3 percent college enrollment rate in 2013.

Through this partnership, the five-year-old HBCU Direct follows its mission of supporting the nation’s 100+ HBCUs through with partnerships to increase revenues and/or reduce expenses. For more information about HBCU Direct, visit www.hbcudirect.com.
ABOUT HOOPS-N-HIP HOP (HHH)
Initially tested in 2007, HHH is the merging of basketball and hip hop enthusiasts. The platform includes a social media community that allows for member expression with like-minded individuals. HHH Touring programs will launch on HBCU campuses and extend to China, Japan, Germany, Brazil and Africa.

ABOUT HBCU DIRECT (HD)
Founded in 2010, HBCU Direct is a private, Atlanta, GA-based company focused on connecting Historically Black Colleges and Universities (HBCUs) with corporate and government business opportunities. The company uses aggregation of HBCUs to drive additional revenues or reduced costs. The company has a specialized niche in driving workforce development and job creation for HBCU students and alumni. HBCU Direct is a member of the Multicultural Communications (MULTICOM) network.

ABOUT ASPIRE
ASPiRE is a television network that celebrates the groundbreaking achievements of African-Americans. ASPiRE offers a diverse programming mix of movies, series and specials featuring music, comedy, drama, faith/inspiration, theater/performing arts, lifestyle and news/information. The network was launched June 27, 2012 by Magic Johnson Enterprises, which acts as a catalyst for driving unparalleled business results for its partners and fosters community/economic empowerment by making available high-quality entertainment, products and services that answer the demands of ethnically diverse urban communities. ASPiRE is available in about 20 million homes in 22 of the top 25 African-American markets including New York City, LosÂ Angeles, Atlanta, Chicago and Washington, D.C. For more information, visit www.aspire.tv, facebook.com/aspireTV and on Twitter @tvASPiRE.

ABOUT TRACY MCGRADY
Tracy T-MAC McGrady is an American professional basketball player who last played for the San Antonio Spurs of the National Basketball Association (NBA) and the Quindao Eagles (China). He is a seven-time NBA All-Star, seven-time All-NBA selection and a two-time NBA scoring champion (2003-2004). Tracy is also managing partner with Rodney Woods in DiversityInPromotions and PlaybookInvestorsNetwork, members of the Multicultural Communications (MULTICOM) network.

ABOUT STREET EXECS
Street Execs Management is a boutique artist management and marketing firm whose clients include Grammy nominated artist 2 Chainz, Travis Porter, Young Dolph, CAP 1, and DJ E Sudd. Founded by partners Allen Parks, Charlie Jabaley, Coach Tek, and David Leeks, the firm has an emphatic loyalty and dedication to assuring their clients succeed on all fronts. With this goal in mind, the company can handle nearly every facet of a clients project in-house.