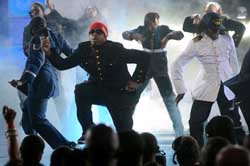 New York, NY (BlackNews.com) — Get ready for an explosive night of sizzling performances, comebacks, cyphers and surprises on the BET HIP HOP AWARDS â€˜10. Taped from the Boisfeuillet Jones Atlanta Civic Center in Atlanta, Georgia, this year’s awards brought out the hottest in the game and proved that “hip hop ain’t dead.” Premiering on Tuesday, October 12 at 8:00 p.m., watch the elements ignite as the “cool kids of hip hop” come together for an incredible night of tributes and performances.

Highlights from the 10 performances include: Rick Ross and Diddy performing the hit single “BMF” alongside rap veteran MC Hammer reciting his hit classic “Too Legit to Quit”; Soulja Boy, in his signature white tank top and designer sneakers, capturing the audience’s attention with his summer anthem “Pretty Boy Swag”; Gucci Mane and Swizz Beatz giving an electrifying performance of club favorite “It’s Gucci Time”; Waka Flocka Flame and Roscoe Dash heating up the stage with their hot collaboration “No Hands”; and, perhaps the biggest surprise of the night, Harlem rap group Dipset reuniting on stage to perform their comeback single “Salute.”

Right after the BET HIP HOP AWARDS ’10, check out the premiere of the new reality series BEING TERRY KENNEDY, chronicling the daily â€˜grind’ of ambitious pro skater/entrepreneur Terry “TK” Kennedy. Premiering at 10:00 p.m.*, watch the mogul in the making grant viewers exclusive access to his life dealing with his various projects in the skate world, fashion, music and entertainment industry.

The first episode finds TK competing for the chance to win $100,000 at the 2010 Maloof Money Cup in New York City. While visiting NYC, TK makes the most of his trip and does a steamy, eye-popping photo shoot with Essence Magazine. Meanwhile, back in Long Beach, things get interesting when TK entrusts the renovation of his skate shop, District 8, to the hands of family members Lil’ Phil, Reggie, Uncle Phil and big brother Phillip.

Throughout the season, BET.com visitors can download free custom voice ringtones by Terry Kennedy and other cast members, as well as ringtones and wallpapers from each week’s episode. BEING TERRY KENNEDY is executive produced by Ron Yassen, Sacha Jenkins, Cash Warren, Circe Wallace and Terry Kennedy along with BET Networks.

*All times are ET/PT.