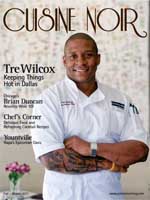 Oakland, CA (BlackNews.com) — After years of planning and months of anticipation, V. Sheree Publishing announced the premiere print issue of Cuisine Noir, the first magazine to showcase African-Americans in food, wine and travel.

Chef Tre Wilcox from Bravo’s “Top Chef” and Marquee Grill & Bar in Dallas reconnected with Cuisine Noir after being the first online feature story in 2007 when the magazine originally launched before changing ownership and re-launching under V. Sheree Publishing in 2009. Readers will enjoy an in-depth look into Wilcox’s career and rise to the top.

Cuisine Noir was founded by Richard Pannell who noticed a lack of African-American chefs in mainstream food and wine magazines. Deciding to do something about it, he started to print Black Cuisine in 1998 as an insert in the Los Angeles Watts Times. When the insert was no longer an option, he continued to shop the concept around and soon changed the name to Cuisine Noir and pitched it to Sheree Williams in 2007 who came on board and helped to launch the magazine first as an e-zine and now in print.

“When Richard first told me about Cuisine Noir, I knew immediately that it would change lives and the way the world perceives African-Americans in food and wine. As an e-zine, we have been able to meet and feature so many talented professionals and now with our first print issue, we can only take that exposure to the next level,” said Williams.

Over the years, readers have enjoyed articles on chefs such as Jeff Henderson, Marcus Samuelsson, Carla Hall, Kevin Mitchell, Joseph Randall and Erika Davis. In addition, the magazine’s high profile features with Dr. Maya Angelou, Coolio, Wendy Williams and Chris “Ludacris” Bridges allows readers to see the “foodie side” of their favorite celebrities that other publications don’t necessarily highlight.

The premiere issue also features actress and comedienne Sherri Shepherd who dishes on her four cornerstones of happiness. With food being one of them, she admits to not being much of a cook, but still knows good food. Yountville proves to be Napa’s epicurean oasis in the issue’s travel story. Once you see what the town has to offer, you’ll see why locals call it home and a great place for food, wine and relaxation.

Readers will also enjoy new food recipes from the test kitchen and cocktails by some of the country’s top black mixologists. Chicago’s Brian Duncan rewrites the wine game to make the experience about enjoyment and not intimidation and our experts select 10 of their favorite wines to enjoy with the change of seasons.

This first issue is surely a collector’s item noting an important milestone in the history of African-American chefs and also the publishing industry. “As African-Americans, our influence in the culinary industry and on cuisines around the world has been overlooked over the years. Cuisine Noir is now a vehicle to acknowledge and document our contributions for generations to come,” said Pannell.

Copies of the issue are on sale at www.cuisinenoirmag.com while they last for $4.50 in the U.S. and $5.50 in Canada. In addition, issues will be sold at various events across the country.

Readers are also encouraged to visit Cuisine Noir’s blog, The Culinary Scoop, for daily news, promotions, cookbook reviews and more celebrity interviews in its exclusive column Walk on the Foodie Side at www.theculinaryscoop.com.

Both Richard Pannell and Sheree Williams are available for interviews. For all media inquiries, please contact Di’Nia Williams at 510-922-9702 x 102
About Cuisine Noir
As the first magazine for African-American chefs, culinary professionals, foodies and wine enthusiasts, Cuisine Noir is a unique and entertaining online and print publication that combines culinary traditions with new cultural experiences. The magazine delivers what readers are looking for which is more than where to find the next great meal. And most importantly, it is a culinary publication that compliments readers’ lifestyles and desire for a diverse culinary experience. www.cuisinenoirmag.com.
About The Culinary Scoop
Launched in September 2010, The Culinary Scoop (TCS) is the sibling of the online magazine, Cuisine Noir. The blog is an entertaining resource for companies, professionals and foodies who want to stay updated as well as share the latest industry news and culinary experiences to the world one delicious scoop at a time. www.theculinaryscoop.com.