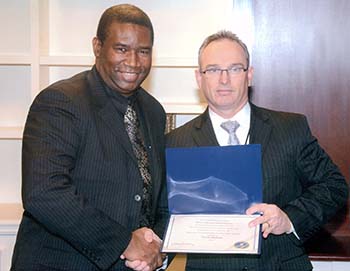 Nationwide (BlackNews.com) — Acting Special Agent in Charge (SAC) Ricky Maxwell, FBI Atlanta, recently presented the FBI Directorâ€™s Award for Community Leadership for 2013 to Orrin Hudson for his exceptional insight and success in reaching disadvantaged youth in the metropolitan Atlanta area through the game of Chess. On April 4, 2014, FBI Director James B. Comey will host all of the FBIâ€™s 56 selectees from around the country at a national ceremony to be held at FBI Headquarters with Mr. Hudson present as Atlanta FBIâ€™s honoree.

Hudson, a motivational speaker and community activist, realized the need to become involved in finding a solution to curb teenage violence within his community. Mr. Hudson recounted that, much like todayâ€™s youth, he was destined for trouble until a teacher changed his life by introducing him to a chess board.

Hudson, who is also a former law enforcement officer with the State of Alabama, believes that prevention is better than detention and, since becoming involved, he has helped over 20,000 children develop the practical skills and techniques to overcome obstacles in life as illustrated through the best and most intellectual visual aid, the chessboard.

After moving to the Atlanta area in 2001, Hudson launched â€œBe Someoneâ€, a 501 (c) 3 non-profit foundation that uses numerous tools, including the game of chess, to promote self-esteem, responsibility, and analytical thinking to underprivileged youths. He has touched numerous young lives and has been relentless in his pursuit of reaching more young people and introducing them to the game that changed his life. His teaching methods are designed to share something positive to inner city kids where the focus is discipline and patience required by the game of chess.

For more details about Orrin Hudson and his Be Someone organization, visit www.BeSomeone.org

About The FBI Director’s Award For Community Leadership

Throughout the year, dedicated and selfless individuals and organizations make extraordinary contributions to their communities across the United States. And every year, the FBI honors the very best among them with its Directorâ€™s Community Leadership Award. Each FBI field office selects one individual or organization for the award, and each award recipient is publicly recognized at the local level. At a later date, all winners are brought to FBI Headquarters to be presented with their award by the FBI Director himself. For more details about the award, visit: www.fbi.gov/about-us/partnerships_and_outreach/community_outreach/dcla