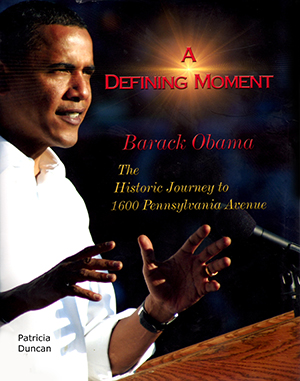 A Defining Moment is a 184-page softcover, pictorial coffee table book, which contains over 300 never-before-seen photographs and speeches, chronicling President Obamas story-book rise from a junior U.S. Senator from Illinois to the first African-American president U.S. history. His ascendency began with a strategic visit to Colorado to campaign for U.S. Rep. Ed Perlmutter in 2006 and court the support of Colorado Democratic Party delegates and rainmakers two fateful years before capturing the nomination for president in 2008.

Duncan received inspiration to publish her first book from the sage advice from her sister, the late Honorable Vikki Buckley, Colorados first African American and twice elected Secretary of State.

“She spoke these prophetic words to me: ‘If you have a dream and a goal, you must go after it; stay focused and accept the good with the bad. You may get knocked back two steps before you can take one step forward, but don’t quit! If you work hard and keep God first in your life, you will persevere,” Duncan said. I have endured several challenges in bringing this book to fruition but the labor of love has been well worth it.

Denver Mayor Michael B. Hancock praised Duncans book as a literary masterpiece that captures one the most memorable and monumental moments in the 21st Century a moment that forever changed U.S. history and the nations political landscape.
A Defining Moment made its first debut in March, 2011 as a hardcover book. In 2012, it was nominated for a NAACP Image Award: Outstanding Literary Works of a Debut Author. The highly acclaimed book was inducted into the Library of Congress (June, 2012) and sold out in hardcover in 2013.