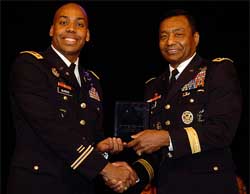 Fort Knox, KY (BlackNews.com) — MAJ Michael Burns received a BEYA (Black Engineer of the Year Award) from Black Engineering and Information Technology Magazine at the 26th Annual BEYA Global Stem Conference in Philadelphia on February 18, 2012. Burns was recognized for his achievement in the category of Promotion of Collegiate Education.The award was presented by LTG Thomas Bostick, Army Deputy Chief of Staff, during a special breakfast for HBCU deans.

MAJ Burns is the Minority Admissions Officer at the Military Academy at West Point where he and his team have increased the number of historically under-represented students each year since Burns took the position in 2009. Burns and his team are credited with the highest enrollment of African Americans in the Academy’s history in 2011.

“The U.S. Army has a deep commitment to the development and education of future leaders. I’m a product of that commitment and feel humbled by the recognition from BEYA,” stated Major Burns.

The Army is one of America’s leading sources of scholarships awarding more than $230 million in ROTC college scholarships to students attending private and public colleges and universities across America. A long standing commitment to youth empowerment and education drives partnerships with BEYA, the National Society of Black Engineers, UNCF, 100 Black Men of America and Essence Communications, Inc.

Currently, fewer than one in four 17-24 year olds are fully qualified to join the Army.