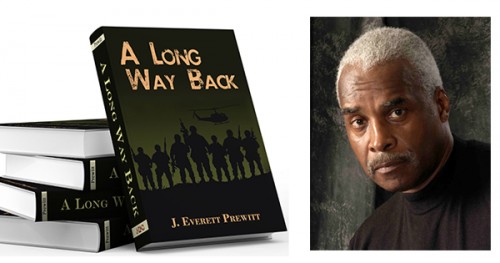 Nationwide (BlackNews.com) –  J. Everett Prewitt, an award winning author, presents his newest novel, A Long Way Back, an intriguing glimpse into the Vietnam War from the perspective of black soldiers.When a reporter for the Washington Post sees a group of wounded, half-starved, black troops disembark from a helicopter in Cu Chi during the height of the Vietnam War, he senses a story, but receives no cooperation from the army or the soldiers.

The men, mostly noncombat soldiers, are the remnant of a squad sent on an illegal mission to Cambodia as punishment for their participation in a race riot at Cu Chi base camp. Led by a battle-fatigued sergeant, they fall under enemy fire. Their leader inexplicably disappears, leaving the ill-prepared soldiers to fight the jungle and enemy on their own.

Although forced to confront the shock of combat and a deteriorating family life, the reporter pursues the story hoping to uncover the truth about what happened to the soldiers.

A Long Way Back is a tense journey merging the lives of the soldiers and the reporter as they struggle to overcome their fear, and face the battles they must fight to survive.

What others are saying:
…this is an intelligently crafted tale, brimming with both suspense and social commentary. — Kirkus Reviews

(A) fine novel. This novel takes an important place on the small shelf of African-American Vietnam War novels… the book is well worth reading. — Vietnam Veterans of America.

This is an awesome story. As a retired Army officer and veteran of two tours in Vietnam and having personally been under enemy fire, I can attest to how well you captured that experience within the events of the story. — Norman Mays, Major, USA, (ret)

I found your novel A Long Way Back to be a compelling recounting of the war from the perspective of black soldiers. — Anita Bunkley, author

A Long Way Back is a riveting story set in Vietnam in the 1960s. It captures the ugliness of war and racism, but is much more a page-turning story of brotherhood, determination, and survival. — Barbara Hacha, author of Line by Line and Sidetracks

About the Author:
J. Everett Prewitt is a Vietnam veteran and a former Army officer. He holds a Bachelor of Arts degree from Lincoln University in Pennsylvania, and a Master of Science degree in urban studies from Cleveland State University. Prewitt was awarded the title of distinguished alumni at both schools.

Prewitts debut novel, Snake Walkers, placed first for fiction in four different literary contests, won the bronze award for general fiction in the ForeWord Magazine Book of the Year contest, and was also honored by the Black Caucus of the American Library Association.

Single and living in Shaker Heights, Ohio, Prewitt is the proud father of Lia and Eric. Learn more at his website at www.eprewitt.com