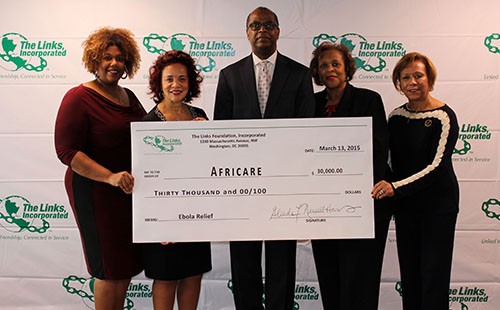 Washington, DC (BlackNews.com) â€“ The Links Foundation, Incorporated, the philanthropic arm of The Links,Â Incorporated, is pleased to announce a donation of thirty-thousand dollars ($30,000.00) to its national partner Africare to aid in the fight against Ebola in Liberia, West Africa.

According to the Centers for Disease Control and Prevention, there have been about 87,000 confirmed or suspected cases of Ebola in Liberia. And 37,000 Liberians have died from the viral infection.

National president of The Links Foundation, Incorporated and The Links, Incorporated, Glenda Newell-Harris, M.D., said “This financial commitment is only phase one of a two part campaign to stop Ebola and promote infection control. The immediate priorities of phase one are to get medical supplies and protective suits,Â masks and gloves to healthcare workers served by Africare.

“Relief efforts by Africare have yielded positive results. And ensuring the recovery is long term is the goal of phase two, said Joan Prince, Ph.D., director of International Trends and Services. “This second phase of the campaign will focus on educating people in their communities about how Ebola is transmitted and how it can be prevented.”

National President Newell-Harris adds, “The Links is committed to standing with our honorary member, President Ellen Johnson Sirleaf, in defeating Ebola in Liberia. The Links care and we want to do everything we can to make a positive difference in the lives of our African brothers and sisters.

From 2013 to 2014, The Links supported four Liberian schools to broaden its International Trends and Services platform for programs designed to service the educational, health and cultural needs of people of African descent. The organization also made donations to Africare in 2012 and 2013, totaling $88,000, for the construction of two maternal waiting homes and the assemblage of 1,100 Mama Kits.
About the Links Foundation, Incorporated
The Links Foundation, Incorporated, the philanthropic arm of The Links, Incorporated, has made more than $25 million in charitable contributions since its founding. Working closely with its sponsors and supporters, The Links, Incorporated is focused on creating transformational programming and impacting lives in communities of color in Services to Youth, The Arts, National Trends and Services, International Trends and Services, and Health and Human Services to improve the quality of life for individuals, families and communities.

About the Links, Incorporated
The Links, Incorporated has celebrated more than 67 years as a women’s volunteer service organization committed to enriching, sustaining and ensuring the cultural and economic survival of African Americans and other persons of African ancestry. A premier international service organization with nearly 14,000 members in 280 chapters located in 41 states, the District of Columbia, and the Commonwealth of the Bahamas, its legacy of friends providing service that changes lives, established by the original circle of nine friends in Philadelphia, Pennsylvania in 1946, is alive and well.

The members of The Links, Incorporated are influential decision makers and opinion leaders. The Links, Incorporated has attracted many distinguished women who are individual achievers and who have made a difference in their communities and the world. They are business and civic leaders, role models, mentors, activists and volunteers who work towards a common vision by engaging like-minded organizations and individuals for partnership.

With more than 2 million service hours recorded in the past three years, members regularly contribute more than 500,000 documented service hours in their respective communities annually. For more information, visitÂ www.linksinc.org.