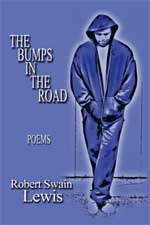 Oklahoma City, OK (BlackNews.com) — The Bumps In The Road, the first collection of poems released by Robert Swain Lewis, is based on real life situations and events. Many have all experienced some “bumps in the road”. Some have experienced financial setbacks, relationships that didn’t work, death of loved ones, or even betrayal by friends. Lewis’ message is that it’s not what you go through that makes you stronger, it’s the attitude in which you embrace the bumps in the road that makes you stronger.

In Part One: Reflecting Back
Robert reflects back on history by introducing “In Memory of Rosa Parks”, “When There was a Cause”, and “Where Have There Gone?”

In Part Three: The Streets
Robert takes readers back to his days in the streets starting with – “The Streets Are Calling Me”, “Those Days”, “The Game”, and “Papa.”

In Part Four: My Prayer
Several short prayers that helped Robert stay focus and remember that there is a light at the end of the tunnel. Robert concludes this book of poems with “Fifteen Years Ago”, an overview of what he experienced and the length of time it took for this darkness to end.

ABOUT THE AUTHOR:
Robert Swain Lewis was born in Cincinnati, Ohio. Robert is a military veteran. Robert graduated from with a BS in Criminal Justice and a BA in Political Science. Robert completed his education by earning a Masters Degree in Public Administration from the University of Oklahoma. Robert has been employed for the state of Oklahoma several years. Robert has worked for the Department of Human Services and currently for the Office of Juvenile Affairs. Robert visits Cincinnati, Ohio twice a year.

ABOUT THE BOOK:
Title: The Bumps In The Road
Author: Robert Swain Lewis
ISBN: 978-1-4251-1275-2
Genre: Poems
Length: 106 pages
Published: January 19, 2011
This book is available online through Barnes & Noble, Amazon.com, and Trafford.com and coming soon to book stores across the county.