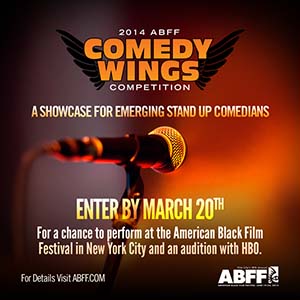 New York, NY (BlackNews.com) â€“ Film Life, Inc. announced the launch of the second annual Comedy Wings Competition, a national search to identify the next outstanding comedian. Submissions are now open, with full details at www.abff.com. The pool of entries will be narrowed down to up ten semi-finalists, from which four finalists will be selected to receive a trip to 2014 ABFF, in NYC, June 19-22, where they will perform live before the festival audience, for the chance to win an audition with HBO.

The Comedy Wings Competition has been created to showcase talented yet undiscovered stand-up comics and introduce them to the industry at large. The competition is looking for someone with a natural gift for comedy who can make us laugh through their unique interpretation of material, steered by physical mannerisms, vocal inflections, with and effortless comedic timing.

â€œThe Comedy Wings Competition is yet another great addition to an already stellar festival, and speaks to our shared goal of identifying outstanding talent across all entertainment genres. Comedy is part of the HBO DNA, and now, thanks to the brilliance of Jeff Friday and his team, it is imbedded into The American Black Film Festival,â€ said Dennis Williams, Vice President of Corporate Responsibility, HBO.

â€œHBO, is an exceptional network for new faces to be associated with;â€ said Jeff Friday, ABFF Founder and CEO of Film Life, Inc. â€œThe Comedy Wings Competition enables them to expand its foothold on spotlighting exceptionally talented individuals beyond those behind the camera, which it has done through its short film competition for the past eighteen years. I am really looking forward to the long term results of this competition.â€

To date, the Comedy Wings Competition at ABFF has provided much needed exposure for up and coming Black talent. Notable comedians who have performed at the festival early in their careers include Kevin Hart, Cedric the Entertainer, J.B. Smoove, Craig Robinson, Tommy Davidson, Earthquake, Bill Bellamy, Ricky Smiley, Sheryl Underwood and Chris Spencer, creator and executive producer of BETâ€™s hit show â€œReal Husbands of Hollywood.â€

â€œABFF is providing an amazing platform for talent and The Comedy Wings Competition is a greatÂ initiativeÂ forÂ emergingÂ comedians to getÂ recognition,â€ said Comedian Kevin Hart. â€œI encourage comedians toÂ submit their performance to this outlet to showcase their talent and follow their dreams.â€

Comedy Wings Competition entrants are required to submit a traditional stand-up comedy routine, 3 to 4 minutes in length, of original material authored by the entrant. Entrants must be a minimum of 21 years of age and of African descent. Submissions will be judged by a panel of esteemed professionals from the entertainment industry. For the Comedy Wings Competitionâ€™s official rules and submission form, please visit www.abff.com/#!submit-talent-comedy/c11mk

Festival passes and tickets on sale now. Catch the early bird pricing through March 15 at www.abff.com/#!passes/cw1l

About The American Black Film Festival
The ABFF (American Black Film Festival) is a four-day event dedicated to showcasing quality films by and about people of African descent. Committed to the belief that Black content creators and artists deserve the same opportunities as their mainstream counterparts, ABFF founder Jeff Friday conceived the festival in 1997 as a vehicle to promote diversity in the film and television industry. Today it serves as the preeminent pipeline to new Black talent in front of and behind the camera, and is regarded as one of the leading film festivals in the world. Festival passes and tickets are on sale now. For more information visit www.abff.com