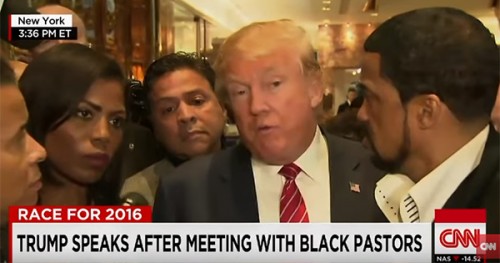 Nationwide (BlackNews.com) — Donald Trumps clandestine meeting with Black clergy leaves many with one question. Besides all that loving in the room, exactly what transpired behind those closed doors?

Politicians can seduce the best of us as they wine and dine us with words, winks, and nods. The Road to 2016 will be full of flirting, wooing, and back scratching. Its all part of the dating game to further an agenda. Politics and religion will never be a match made in heaven. Politicians know the deal and the clergy do too.

Ask the OJays. A lot of things jump off because of money. In my latest novel, Slippin Sippin Saints (Ultra Pearl Power), I touch upon the influence of the Black church and the power of money. Wealthy businessman Price Alexandra propositions his cash-strapped pastor for a night with the first lady. Thats just the tip of the iceberg.
For better or for worse the church has a tremendous ability to affect change. Like James Wright singing the praises of Patti LaBelles sweet potato pies, a pastors words can easily translate into an endorsement that a politician can take to the bank. Pastors know the power of the black dollar and politicians do too.

A savvy politician pours into demographics that serve him or her best. Sometimes after the election, we learn that it was just a ploy. By no means am I implying that all politicians are wolves in sheeps clothing, or that all pastors are righteous. However, as shepherds of Gods flock, religious leaders and pastors have a responsibility to their congregation.

Effective pastors and politicians exhibit some of the same qualities. And though they make strange bedfellows, its not unusual for politicians to seek counsel from a trusted clergyman. The connection cannot be denied.

As a child, I pledged allegiance to the American flag and one nation under God every day. Then one morning the ceremony stopped. As I matured I realized that we worship differently. There are those who worship animals or inanimate objects. There are those who dont worship or believe in Him at all. Yet, we are all a sum total of our experiences and beliefs. Those experiences and beliefs shape policy, legislation, jobs, housing, healthcare, etc.

In a perfect world, politics and religion mix quite nicely – like sugar and spice. But lets keep it real. We are not there yet. Religion and politics are like oil and vinegar, setting the stage for those Seven Deadly Sins. We need a healthy distance between the two arenas. Separation of church and state encourages accountability and transparency. Unfortunately, it doesnt guarantee it.

The influence of the Black church should not to be taken for granted or viewed lightly. Attention politicians: particularly during an election year pastors can be your closest allies or biggest opponents. Ultimately, however, its up to the voters to decide. God bless America.