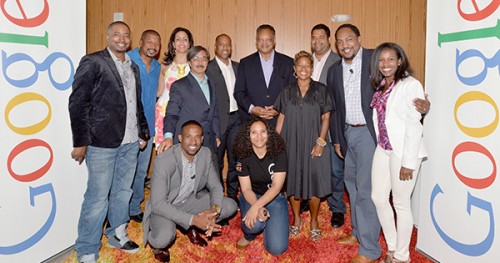 Los Angeles, CA (BlackNews.com) — The Rainbow PUSH Coalition partnered with Google to present the “Dream Makers, Risk Takers and Money Makers: Diversity and Inclusion in Tech Forum” at the Google headquarters in Los Angeles. This forum is part of an ongoing program designed to identify ways to open access and create pathways for people of color into the technology industry, as well as increase the level of diversity in Silicon Valley and beyond. Reverend Jesse Jackson and Google executives were on hand to discuss the efforts of Rainbow PUSH, along with a panel of esteemed technology executives who explored the best ways to increase diversity and innovation in technology.

“Our goal is to bring unheard voices front and center. We are the conduits to get you heard,” Gill said. Genteel added,”Google’s mission is to organize the world’s information and make it accessible. With Rainbow PUSH, our mission is to make that information accessible to all.”

The main discussion began with a panel led by Navarrow Wright, who moderated the executive panel examining the opportunities and challenges minorities face in technology. Taking advantage of those opportunities, the executives agreed, will lead to great progress and diversification in technological industries. Each panelist gave insight into how the rapidly changing nature of technology and the spread of information will allow people of any color to gain a foothold in the industry and monetize their efforts.

Following the panel, Wright sat down for a fireside chat with Grammy-winning gospel singer/songwriter Erica Campbell to discuss launching and growing her YouTube channel and content creation.

“If you are trying to reach people, social media is a great way to find out if you have. Each [YouTube] subscriber is not just a number for me. They are a person who is interested in what I am doing,” said Campbell.

The event culminated with a discussion between Ducard and Jackson, Founder and President of Rainbow PUSH Coalition about the goals of the Push Tech 2020 initiative and solutions that support diversity in technology and beyond.

“Google has something the community needs: advance technology. The community has something Google needs: market, money, tele-location. Together we can make a great impact. This is the age of advance science technology. We intend to have, in a thousand churches, tech centers so that children can do apps and codes and learn financial literacy and stock market gain,” said Jackson.

With an audience full of emerging entertainment and technology executives, event panelists and speakers provided valuable insight on diversifying the technology field, including taking advantage of expanding platforms and resources and monetizing efforts at every opportunity.

For quote highlights from the panel discussions from Rev. Jesse Jackson, Erica Campbell, and all the panelists, clickÂ here.