The 2013 Conference Theme Is â€˜Teens: Too Important to Fail’ 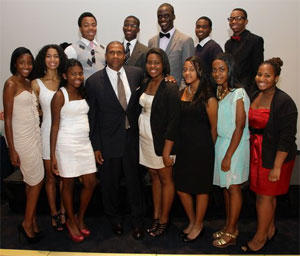 Los Angeles, CA (BlackNews.com) — What do a U.S. Department of State official, a common wealth of Pennsylvania state representative, a physician from Atlanta and one of the youngest graduates of Harvard Law School all have in common? They are all young leaders who as teenagers participated in Tavis Smiley Foundation’s Leadership Institute program.

The Tavis Smiley Foundation is now accepting applications for the 2013 Leadership Institute, Teens: Too Important to Fail, scheduled for July 26-29 on the campus of the University of California Los Angeles (UCLA).

The four-day program for teens ages, 13-18, includes leadership training workshops, a community service project and sessions on youth advocacy, education and civic engagement. The cost is $400 (early bird registration) before June 30 and includes housing, meals and workshops. Late registration is $450. The deadline is July 20. To register visit: www.rsvpbook.com/LeadershipInstitute

To date more than 4,000 youth have participated in the Leadership Institute. Alumni include young people like Detroit native Victor Marsh, a deputy political chief for the U.S. Department of State assigned to the U.S. Embassy in Cyprus and Philadelphia native Jordan Harris whose election in 2012 made him one of the youngest ever elected officials serving as a Pennsylvania State Representative for the 186th District in Philadelphia. Atlanta native Dr. Evelena Cousin-Peterson received her medical degree in May from the University of Louisville. And, Cortlan Wickliff, 22, a native of Houston, TX made history in May as one of the youngest African American males to receive a law degree from Harvard.

“Our premise has always been that young people exposed to leadership concepts at an early age are likely to mature into adult leaders for social change,” said Smiley. “I’m proud of the accomplishments and honors that our graduates have earned, and I look forward to meeting young persons this summer whose futures are even brighter.”

Institute delegates are selected based on their academic achievement, demonstrated and potential leadership, an essay and letter of recommendation. A key component of the Institute is the foundation’s 13-member National Youth Advisory Council. These teen alumni help design and run the Institute.

The Coca-Cola Company has provided major funding for the Leadership Institute.

About the Tavis Smiley Foundation
The Tavis Smiley Foundation is a nonprofit 501c3 organization founded in 1999 by Tavis Smiley to enlighten, encourage, and empower youth by providing leadership training that will promote and enhance the quality of life for their lives, their community and the world. Since its inception, more than 6,500 youth have participated in the foundation’s leadership workshops and conferences. The foundation, is in its 14th year in existence is based in Los Angeles. For more information, visit www.youthtoleaders.org.