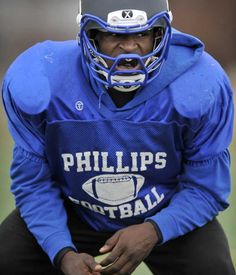 
CHICAGO, IL – On Saturday, November 7, 2015 the Wendell Phillips Academy High School Wildcats qualified for the Illinois High School Association (IHSA) Quarterfinals with a 28 – 6 win over Johnsburg High School. The Wildcats will now take their team with an 11 – 0, record to Gately Stadium (810 E 103rd St.) on November 17 at 7 p.m., to take on Geneseo High School for a chance to move on to the IHSA Semifinals. The recent successes on the field are the product of an off-the-field story that started with the transformation of the school by the Academy of Urban School Leadership (AUSL) in 2010.

Despite Phillips’ unprecedented success in athletics, overcoming hardship off-the-field has been as large of a test as any opponent on-the-field. Phillips is located in the historic Bronzeville community, and for many years prior to AUSL management, the school reported high drop-out rates and low test scores.  Since the fall of 2010, Phillips has been managed by AUSL, a nonprofit Chicago Public School (CPS) school management organization that creates schools of excellence by developing highly effective teachers and transforming educational outcomes for students in what once were CPS’ lowest performing schools.

The results of AUSL’s transformation of Phillips have been dramatic. On their most recent ACT, Phillips students scored higher than at any point in the past 15 years and last year 100 percent of the senior class applied and were accepted to college with more than $5 million in scholarship offers. These and other indicators point to a rise that mirrors the play of the Wildcats on the football field.

“AUSL was founded with the understanding that athletics, music and other before and after school programming play a major role in the social, behavioral and academic growth of a chronically low performing school. What Phillips has accomplished is not only a remarkable achievement for the school but is also a model for the entire city,” said Mike Koldyke, AUSL’s Founder and Chairman Emeritus. “The team spirit and professionalism of the players is inspiring.  In addition, the pride that the community has in this team could be seen all fall with more than 1000 spectators overfilling the bleachers at their games.”

The successes of the football team have been a source of stability for much of the student body. The football program is the second largest program in CPS involving more than 90 student athletes. The varsity team is led by 19 seniors all of whom are on track to graduate and several of them that are being recruited to play at the collegiate level. The team has a number of players who are highly sought after by colleges on its roster including Linebacker Amani Jones who has committed to the University of Iowa, Wide Receiver Quayvon Skanes who has committed to the University of Connecticut and Defensive End Amir Watts who is uncommitted but is being recruited by several D1 programs.

“Our student athletes are the embodiment of the hard work our teachers, community and AUSL have done to transform this historic high school to its former glory,” said Wendell Phillips Head Football Coach Troy McAllister. “Whether it is studying game film to get ready for a matchup, showing the utmost sportsmanship on the field or achieving new personal goals in the classroom, we challenge our players, and frankly all of our students, to believe in their own self-worth and that hard work and pride are the prerequisites of success.”

About The Academy for Urban School Leadership

AUSL is a Chicago nonprofit school management organization that creates schools of excellence by developing highly effective teachers and transforming educational outcomes for students in the lowest performing schools.

AUSL was founded in 2001 and today manages 32 Chicago Public Schools serving more than 18,000 students. Over 880 teachers have graduated from the AUSL Chicago Teacher Residency™.