New specials include a story of the UNDERGROUND RAILROAD and, from INDEPENDENT LENS, an intimate look at “Daisy Bates: The First Lady of Little Rock,” a collection of interviews called “Black Power Mixtape 1967-1975” and a filmmakers cross country campaign in “More Than a Month” 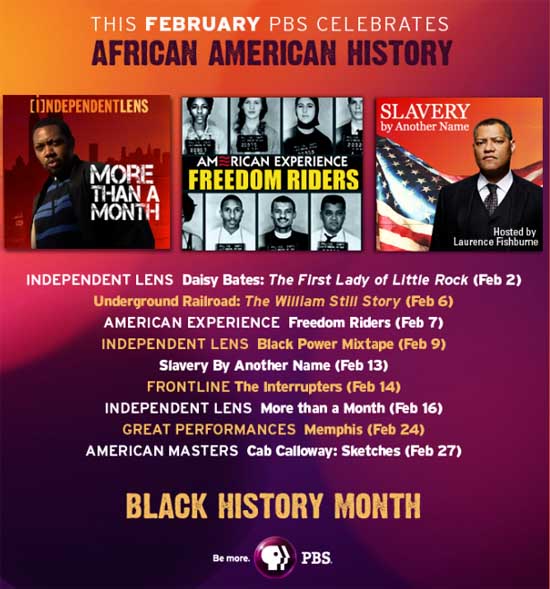 Arlington, VA (BlackNews.com) â€“ PBS recently announced an expansive slate of programs profiling the rich history, culture and contributions of African-Americans. The programs air as part of PBS’ celebration of Black History Month, February 2012. With new programs that delve into the archives of history, this year’s schedule provides an in-depth look at a variety of historical events from the post-Emancipation era to the rise of the black power movement.

INDEPENDENT LENS presents three new shows appearing as part of the Black History Month line-up. “Daisy Bates: The First Lady of Little Rock,” premiering Thursday, February 2, at 10:00 p.m., tells the story of Bates’ life and her public support of nine black students who registered to attend the all-white Central High School in Little Rock, Arkansas (See advanced clip here). Premiering on Thursday, February 9, at 10:00 p.m. is a compilation of interviews from leading African-American artists, activists, musicians and scholars in “Black Power Mixtape 1967-1975.” (See advanced clip here) In the late 1960s and early 1970s, Swedish television journalists came to America to document the burgeoning black power movement. This long-lost trove of film, combined with contemporary interviews to create an irresistible mosaic chronicling the movement’s evolution, features interviews with seminal black power leaders, including Stokely Carmichael and Eldridge Cleaver, as well as author/activist Angela Davis. And in “More Than a Month,” premiering on Thursday, February 16, at 10:00 p.m., Shukree Hassan Tilghman, an African-American filmmaker, is on a cross-country campaign to end Black History Month. Through this tongue-in-cheek and thought-provoking journey, “More Than a Month” investigates what the treatment of history tells us about race and equality in a “post-racial” America. (See advanced clip here).

In the compelling story of an unsung hero, UNDERGROUND RAILROAD: THE WILLIAM STILL STORY, airing Monday, February 6 at 10:00 p.m., explores one man’s mission to help slaves escape to freedom. The program looks at the inner workings of the Underground Railroad through detailed records, diaries and other written accounts of the freedom seekers who made their way across the U.S. border to Canada.

SLAVERY BY ANOTHER NAME, premiering Monday, February 13, at 9:00 p.m., was a Sundance Film Festival selection for 2012. This new documentary based on the Pulitzer Prize-winning book by Wall Street Journal senior writer Douglas A. Blackmon examines the concept of “neoslavery,” which sentenced African-Americans in the post-Emancipation South to forced labor for violating an array of laws that criminalized their everyday behavior. Award-winning actor Laurence Fishburne narrates the film.

FRONTLINE “The Interrupters,” premiering Tuesday, February 14, at 9:00 p.m., follows a group of former gang leaders in Chicago who try to “interrupt” shootings and protect their communities from the violence they themselves once committed. From director Steve James (HOOP DREAMS, Stevie), “The Interrupters” is a compelling observational journey into the stubborn, persistent violence that plagues American cities.

Rounding out the Black History Month programming are three shows that highlight the artistic contributions of African-Americans. On Friday, February 24, at 9:00 p.m., turn the radio dial back to the 1950s for the tale of a black singer, a white DJ, forbidden love and the birth of rhythm and blues in GREAT PERFORMANCES “Memphis.” The original Broadway cast members of the 2010 Tony Award-winner for Best New Musical reprise their roles in this roof-raising celebration of music.

In AN EVENING WITH VALERIE SIMPSON, premiering in February 2012 (check local listings), Gwen Ifill interviews Valerie Simpson, who for more than 40 years wrote hit-making songs with her husband, the late Nick Ashford. As performers, their best-known duets are “Solid” and “Found a Cure.” This is an intimate tribute to their artistry, with performances by Patti Austin, Kindred The Family Soul and Valerie Simpson.

Finally, AMERICAN MASTERS closes out the month with a profile of Cab Calloway, one of the first black musicians to tour the segregationist South and a regular performer at Harlem’s famous Cotton Club. “Cab Calloway: Sketches” premiering Monday, February 27, at 10:00 p.m., showcases this exceptional figure in the history of jazz, a bandleader and singer who charmed audiences around the world with his boundless energy, bravado and elegant showmanship. Calloway was at the top of his game in the jazz and swing eras of the 30s and 40s with his signature song “Minnie the Moocher,” featuring the popular refrain “Hi de hi de hi de ho,” and his timeless rendition of “It Ain’t Necessarily So.”
“Each year, PBS is committed to airing historically informative programming that not only pays tribute to the men and women who sacrificed so much for our nation, but who influenced change in the face of adversity,” said Donald Thoms, Vice President, Programming. “We hope viewers will find PBS’ commemorative programming both enlightening and enjoyable.”

In addition to premieres, PBS will air an encore of FREEDOM RIDERS: AMERICAN EXPERIENCE on Tuesday, February 7, at 8:00 p.m. FREEDOM RIDERS is acclaimed filmmaker Stanley Nelson’s powerful and inspirational story of the more than 400 black and white men and women who, using non-violent tactics, risked their lives to challenge segregated travel facilities in the South in 1961.

Thousands of hours of PBS programming are available on the PBS Video Portal (http://video.pbs.org), including a special collection for Black History Month 2012, featuring new and encore programming available at PBS Black History (www.pbs.org/special/black-history).
Find more information and high-resolution images from these programs on PBS PressRoom.

PBS, with its nearly 360 member stations, offers all Americans the opportunity to explore new ideas and new worlds through television and online content. Each month, PBS reaches 124 million people through television and 20 million people online, inviting them to experience the worlds of science, history, nature and public affairs; to hear diverse viewpoints; and to take front-row seats to world-class drama and performances. PBS’ broad array of programs has been consistently honored by the industry’s most coveted award competitions. Teachers of children from pre-K through 12th grade turn to PBS for digital content and services that help bring classroom lessons to life. PBS’ premier children’s TV programming and its website, pbskids.org, are parents’ and teachers’ most trusted partners in inspiring and nurturing curiosity and love of learning in children. More information about PBS is available at pbs.org, one of the leading dot-org websites on the Internet, or by following PBS on Twitter, Facebook or through our apps for mobile devices. Specific program information and updates for press are available at www.pbs.org/pressroom or by following PBS Pressroom on Twitter.