The ruling declares: “A citizen has no right to a jury composed in whole or in part of persons of his/her own race.” 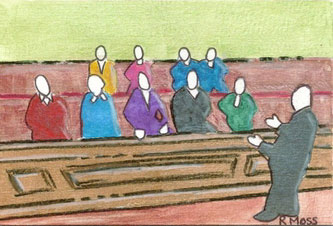 Nationwide (BlackNews.com) — According to Roger Hicks, founder of Race Justice, the court ruling which makes it legal for African-Americans (and other minorities) to be tried by all-white juries has proven over time to be nothing but an illegal racially discriminatory practice and procedure which has caused grave injustice to people of color for decades.

Hicks says, that if not repealed, Batson will continue to have devastating and destructive effects over the lives of people of color by depriving them their civil and constitutional right to a fair and impartial jury system under guise of judicial process.

He comments, “Indeed, in America, a country designated as the melting pot, with its many different types of people, ideas, religions, etc. existing together, racial diversity on juries would unquestionably improve a juryâ€™s ability to assess witness testimony, evaluate cross-racial situations, avoid unfounded presumptions, and permit a fair outcome in both criminal and civil proceedings.”

“Equally important, racial diversity on juries would improve public confidence on part of African-Americans (and other minorities) in our American Jury System,” Hicks adds.

For more details and/or to sign the online petition, visit www.racejustice.org