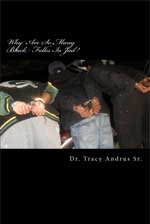 Nationwide (BlackNews.com) — Dr. Tracy Andrus, one of the top African-American criminologists in the country, has released what is sure to become another best seller – his latest book, Why Are So Many Black Folks In Jail?: The Conspiracy to Exterminate Black Folks, Colored Folks, Negroes, Negroids, and African Americans in 21st Century America. This book raises very important questions about the plight of black folks and the uses of incarceration in America.

According to Dr. Andrus, African Americans are disproportionately represented in every state in the United States. His book focuses on the root causes of incarceration from a criminologist’s perspective, and is a must read for all lawmakers, criminologists, convicts, American citizens and people interested in conspiracy theory. It’s also a great read for criminal justice students around the world.

Because of knowledge and research, Dr. Andrus is one of the most sought after speakers in America. His previous best selling books include Beneath the Skin of Black Folks – How Black Folks In America Really Feel, his dissertation which was converted into a book entitled A Macro-Analysis of Poverty and African American Incarceration, and an autobiography about his life entitled From Prisoner to PhD – My Eleven Year Journey.