This intimate story including captivating photos is about a woman who can undeniably claim to be the first surviving victim of the so-called Cleveland Strangler, Anthony E. Sowell. As told by her former lover turned caregiver vividly depicting his determination to solve her cold case and indict Sowell for her attempted murder 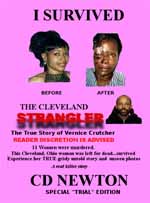 Cleveland, OH (BlackNews.com) — Five years ago, on June 18, 2006, Vernice Crutcher encountered now on trial accused serial killer Anthony E. Sowell. He lured her to a vacant house with the promise to get her high. Tragically while there he choked, strangled and brutally beat her. He left her for dead. Fourteen hours later she miraculously regained consciousness and staggered to a nearby friend’s house where she collapsed. The authorities were called. Unfortunately, due in part to an inept investigation her case went cold. However, virtually undetected a serial-killer commenced his killing spree. Nonetheless, three years later, October 29, 2009, Sowell emerged as a sadistic serial killer when authorities made the grisly discovery of 11 decomposing bodies all black females at his home.

This gripping story of I Survived The Cleveland Strangler”: The True Story of Vernice Crutcher was written in part to solve Vernice’s cold case. Her caregiver and author (CD Newton) is determined to prove that Anthony Sowell was her attempted murderer that day. In vivid detail he reveals the harrowing moments inside the vacant house and the life altering aftermath. He also shares his persistent efforts not to allow the authorities to cover up this pivotal case. (A year after Vernice’s attack Crystal Dozier 1st of the 11 Imperial Avenue murders (disappeared May 2007) was found buried in Sowell’s back yard. Like Verncie she had a cord around her throat. Crystal lived only a few doors away from the vacant house where Vernice was lured to a year earlier.)

“Women raped, beaten up in empty house” Tuesday, June 20, 2006-The Plain Dealer. That woman, Vernice Crutcher, the first surviving victim is painfully not in the court room with the other victims today. She is Anthony Sowell’s best kept secret. “Drawing of suspect” Friday, June 30, 2006-The Plain Dealer- The resemblance to Sowell is very apparent. The author is determined to expose the truth. He asserts had Vernice Crutcher’s case been solved during the summer of 2006, with the arrest of Sowell, then all the subsequent attacks and murders would have never occurred. The 11 women of Imperial Avenue would all be alive today.
About the Author:
Charles D. Newton (CD) is a playwright (Karamu Performing Arts) and novelist (Foreclose the Predators-Pendium Publishing) and independent publisher of Double or Nothing Publishing. But more importantly he alone has the unique vantage point in writing this riveting story. He was the one she had the emergency room call five years ago. Quietly behind the scenes CD has been tracking accused serial-killer Anthony Sowell longer than anyone in Cleveland. He vows to push for Sowell’s indictment for attempted aggravated murder of his best kept secret his first surviving victim Vernice Crutcher.
For more information, about the author or the book contact::
Publisher: Double or Nothing Productions
Charles D. Newton (CD)
clevelandstrangler@cdnewton.com
216-375-1869
www.cdnewton.com
Special “Trial” gallery edition available as an E-book $20.00 USD (Hardcover print edition Fall 2011)