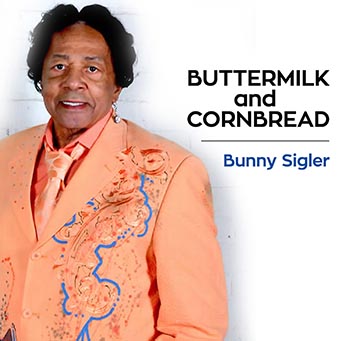 Complete with soulful ballads honing in a contemporary sound, Sigler pushes his vocals on this upbeat and lighthearted tune. Buttermilk and Cornbread, Bunny describes is a blues track that reminisces of southern cooking and sweet country memories. Sizzling with that down south sound, Buttermilk and Cornbread has a catchy chorus and a sensory smorgasbord of lyrics.

This feel good song recalls relaxing times and nostalgic jam sessions uninhibited sing-alongs with friends that seem endless. The six minute songs highlight is the unexpected trumpet solo that cuts in between at the halfway mark and the blend of unison backup vocals.

Backed by longtime collaborators, Instant Funk, the band has teamed up once again with Sigler. Currently in the studio working on new material, theyre ready to hit the road again and bring their live performances worldwide.

…Sigler has no problem with shaking things up, and he demonstrates his comfort with envelope pushing through Bundino. — Soul Tracks

Along with the original mix of Buttermilk and Cornbread, Bunny will also release a special remix version of the song an upbeat rendition of the standout single produced by Joe Gallagher, Bunny Sigler, Instant Funk, and Saint Man. The remix will have listeners wanting more and radio hosts playing the track on repeat. A music video to accompany the single featuring Instant Funk will also be released in July.