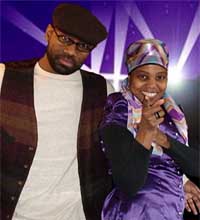 Atlanta, GA (BlackNews.com) — Jenny and Rufus Triplett have been awarded the highest coupleâ€™s honor in recognition of a marriage that has stood the test of time. They have always kept it 100 percent real during their two plus decades of matrimony. The couple has survived military service, incarceration, raised three young men, run their own multimedia company and are celebrating 22 years of successful marriage. Out of all their many trials and tribulations however, Ebony Magazine’s recent designation as “Couple of the Year” is perhaps the icing on their long-standing wedding cake!

Highlighted in the February 2012 issue of Ebony Magazine, the world’s most popular Black American monthly, the Triplett’s are acknowledged for their faith, perseverance and commitment. Their seemingly plain and simple approach has resonated through their marriage tips and relationship advice given to newlyweds, engaged, dating and long term couples as well as the editors of Ebony Magazine.

The Tripletts are the owners of Dawah International, LLC, a multimedia company which publishes Prisonworld Magazine and distributes Prisonworld Records. They also co-host their own weekly radio show, the Prisonworld Radio Hour, which airs on two Atlanta radio stations, WWWE-1100 AM International Talk Atlanta, Mondays at 1:00 pm EST and WAEC-Love 860AM Inspirational Talk Atlanta, Tuesday-Friday from 12am-3am. Their radio show draws a global audience of over 1.2 million listeners monthly including distribution within the prison system and syndication to iTunes. Fueled by their own personal experience in the prison system, they write a successful motivational and information blog and are requested speakers for correctional facilities, non-profit organizations, corporate functions, schools, colleges and universities.

While creating pre-buzz for their upcoming book Surviving Marriage In The 21st Century: 13 Easy Tips that Can Help You Get to 20 years and Beyond (www.survivingmarriagetips.com), the Tripletts started a YouTube video series on marriage tips. The YouTube series gained popularity across the country and a companion Twitter posting on marriage attracted one of the editors at Ebony Magazine, sparking the conversation that led to their recognition.

Expresses Jenny, “2011 turned out to be a phenomenal year for us and paved the way for 2012. First, we were humbled earlier in the year to receive a special letter of note from The White House, and then later, the news from Ebony Magazine. It has all been just a wondrous blessing.”

Rufus and Jenny are one of the few professional husband and wife teams who do just about everything together, having survived over twenty plus years of marriage being attached at the hip. The couple met in the late 80’s when Rufus was singing and touring with the platinum R&B group, Ready for the World. Jenny was an intern at a radio station and headed the marketing outreach team for the act.

The Tripletts have brought education, inspiration and encouragement to those in prison and at-risk youth. Their Prisonworld App, in the Android Market, is the first of its kind that connects the incarceration nation. Being parents of three boys, Michael, 22, Mosi, 20 and Miles, 18, they know first-hand the responsibility of not only raising children, but African-American men who could end up as stereotypes. They are passionate about family and detouring young men and women from the criminal justice system. They use their platform to address issues pertaining to dysfunctional families, substance abuse, entrepreneurship, marriage & relationships, self-conscious addictions, incarceration and stereotypes.

As a husband and wife team, Rufus and Jenny readily acknowledge their individual male and female perspectives but both agree that communication is the greatest survival tip. Their appearances on “Family Court with Judge Penny” and “Dr. Phil” garnered rave reviews for their parenting philosophies. Jenny has appeared on “The Mike & Juliet Morning Show” giving some words of wisdom to “The Real Housewives of Atlanta” and she is also a prison and relationship pundit contributing to the Daily National and has provided commentary for CNN, Black Enterprise Magazine, MSN.com and the Los Angeles Times.

As the Ebony Magazine “Couple for the Year,” the Tripletts have been rewarded the opportunity to create their own fragrance. They are not sure if they are going to do “his” and “hers” or a unisex scent!

For more information about the Triplett’s, their Surviving Marriage book and their Prisonworld brand, log onto www.rufusandjennytriplett.com or you can find them on Twitter with almost 10,000 followers @Prisonworld. They can also be reached at 678-233-8286.