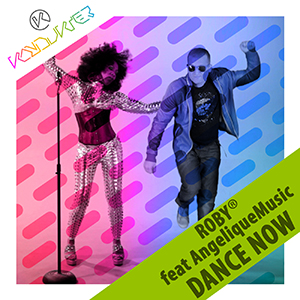 The release came about when earlier this year, Roby R began the search for someone to collaborate on a dance music track he wanted to record. He contacted friend, musician and producer, Ivan Jelenkovic in Paris who suggested his friend and frequent collaborator, Los Angeles based singer-songwriter AngeliqueMusic – demo’s were sent back and forth between the two and an inspired musical relationship was launched.

AngeliqueMusic recorded her musical contributions in Los Angeles, Roby R recorded and mixed his contributions in Serbia and Label Worx handled the mastering in London. Later, friends from Rio, Sydney, Amsterdam, Dubai and Paris contributed dance moves near famous landmarks for a remarkable release video, to be premiered on MTV’s ‘Party Zone’ the week of release for ‘Dance Now’ – globally set for July 13th.

AngeliqueMusic has previously worked as an artist with The Mary Jane Girls (featuring Maxi and Cheri), Producers George Tobin, David Leonard, Edmond Sylvers, as well as Reggae artists Eddie Capone and Abou Smith. Fully multi-lingual, her lyrics are sung in Spanish, French, and English, and as an independent artist, AngeliqueMusic has achieved success with her style of ‘Neo soul with a touch of funk’ embraced by fans and radio stations across the globe. In her own words; The feeling of touching someone through my music is the only drug that I need.. well maybe a bit of chocolate says AngeliqueMusic. For me, the adrenalin rush that I get when I’m writing, recording or producing is exhilarating and I look forward to future collaborations with Roby R.

Dance Now premieres on MTVs Party Zone and shows are planned in support of the release.