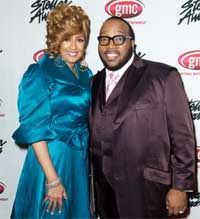 “GMC is proud to be the Number 1 destination for gospel music entertainment,” said Brad Siegel, Vice Chairman, GMC TV. “Since 2009, GMC has been the exclusive cable network of The Stellar Awards. We are thrilled to present this year’s show, which is packed with a phenomenal lineup of gospel artists, riveting performances and many memorable moments.”

“I’m thrilled the Stellar Awards is airing on GMC,” said Gospel superstar Kirk Franklin. “Their commitment to quality, original faith-based programming is also evident in the network’s fresh new lineup of shows. I’m honored to be involved with GMC and I look forward to being featured in the upcoming reality series ‘The Song That Changed My Life,’ coming in June, 2012.”

This year’s show also recognizes the great accomplishments of some of Gospel’s trailblazers. John P. Kee received the James Cleveland Lifetime Achievement Award for his accomplishments over a career that spans three decades and is serenaded by Isaac Carree, Sheila Lakin, Lowell Pye and Zacardi Cortez. Dorothy Norwood, dubbed “The World’s Greatest Gospel Story Teller,” receives the Ambassador Dr. Bobby Jones Legends Award, presented by the veteran show host. Vy Higgensen, the first woman to host a morning show on New York radio as well as produce a faith-based musical on Broadway, receives the Thomas A. Dorsey Most Notable Achievement Award for her work with the “Gospel for Teens” program.

Jackson stated, “Our 27th special was by far our most diverse program to date, with performances that spanned the entire spectrum of Gospel music including Hip Hop, Rap, Contemporary, Praise & Worship, and Traditional… our best ever from start to finish.”
GMC (www.watchGMCtv.com) is America’s favorite television channel for uplifting music and family entertainment. The Parents Television Council(TM) awarded its Entertainment Seal of Approval(TM) to GMC for being “an authentic family-friendly cable network.” In 2011, GMC was the second fastest growing ad supported cable network in total day households and A18-49. GMC can be seen in more than 51 million homes on various cable systems around the country, as well as DISH Network on channel 188, DIRECTV on channel 338 and Verizon FiOS on channel 224. Follow GMC TV on Facebook and Twitter at http://facebook.com/gmctv and http://twitter.com/gmctv.