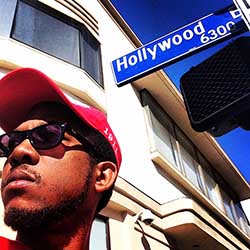 Hollywood, CA (BlackNews.com) â€“ More than a dozen supporters including family members, colleagues, and the general public, have pledged to change the color of Hollywood, $1 at a time.

A 60-day Kickstarter campaign has been launched, Monday, February 10, 2014 to secure the necessary $100,000 budget to independently produce the first Science Fiction film written and directed by an African American. Titled Vice Versa, the filmâ€™s producer, Ryan A. Cole is no stranger to blazing new trails. As the first student Emmy winner in Howard Universityâ€™s history, four years later, Cole continues to shoot for the stars, literally.

The first two things that come to mind when thinking of Sci-Fi are big budgets and predominantly white casts. Cole would like to change that. The film takes place in the year 2025, where a new technology called Extraction allows for the removal of sin, in return for a â€œperfect lifeâ€.

What seems like an ambitious concept proves to champion the support of a once overlooked and marginalized demographic. â€œThe lack of quality scripts, stale stereotypes, and flat out ignorance are a few factors resulting in the African American moviegoersâ€™ dissatisfactory experience,â€ says Cole. â€œHollywood is programmed to exploit these black tropes for maximum profit.â€ There are thousands of untold stories Cole believes can ultimately lead his community into what he calls, a â€œBlack Renaissanceâ€.

With the bar set high, $20,000 raised in less than a day, it is up to the African American public to make a bold statement. â€œWe have to raise our own funds and write our own scripts, so that we can create diverse roles for black actors.â€

If you would like to contribute to the film, please visit Vice Versaâ€™s Kickstarter page by clicking the link: http://kck.st/1g0oTnB