“Runaway Island” with Oscar-Nominated Director at the helm set to premiere at the American Black Film Festival in NYC Film starring A. Russell Andrews explores love and loss 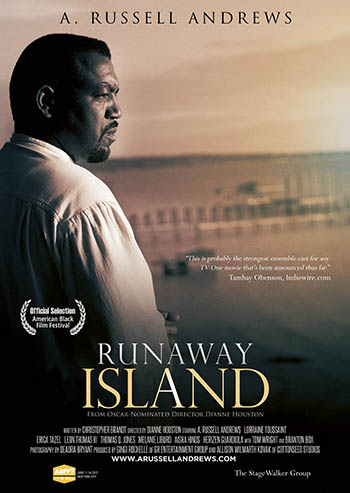 Los Angeles, CA (BlackNews.com) â€“ Multi-award winning actor A. Russell Andrews is starring as Rev. Clinton Hines, a grieving father dealing with the loss of his daughter in the original movie Runaway Island, a story about a group of troubled strangers looking to escape their woes, and who end up sharing a transformational experience on an island – Isle due Soleil, a secluded 1700s Gullah Sea Island resort – steeped in African American heritage and culture. There will be a World Premiere screening of the film at the 2015 American Black Film Festival (ABFF), the nations largest gathering of Black film and TV enthusiasts in New York City, June 11- 14, 2015.

Oscar-nominated Dianne Houston (Tuesday Morning Ride) is at the helm of this unique story written by Christopher Brandt, the 2014 American Black Film Festival screenplay competition winner. In the film, Andrews is a successful pastor who recently lost his daughter to leukemia. He is forced to deal with his loss while taking stock of his life and renewing his love for his wife.

“My character, Reverend Clinton Hines, is struggling with his faith, and rightly so. But I dont think its about whether a greater power exists, but is it just? Is it fair?” said Andrews, who recently finished working on the short film RESET with award-winning director Arun K. Vir who was voted one of HBO’s ‘Women to Watch. Andrews is also featured in the upcoming N.W.A. biopic Straight Outta Compton directed by F. Gary Gray.

The film is produced by Gingi Rochelle of GR Entertainment Group and Allison Wilmarth Kovak of Cottonseed Studios, and is slated to premiere on TV One on Saturday, July 25 at 8 PM/ET.

About A. Russell Andrews
With a career that spans nearly 25 years, Andrews is the founding member and producing artistic director of the multi-award winning Los Angeles-based stage company, StageWalkers. The company has received over 30 LA Theatre award nominations with wins that include 2 NAACP Theatre Awards and 2 LA Stage Alliance Ovation Awards (L.A.s version of the Tony Award) for his work with Pulitzer Prize winning author August Wilsons Piano Lesson, Jitney, and Ma Raineys Black Bottom in which Andrews received his first NAACP Theatre Award for Best Actor. Considered a Wilson hired gun, Andrews played the role of Youngblood in the cast of August Wilsons Jitney that was honored with Londons prestigious Sir Laurence Olivier Award for Best New Play. Andrews other credits include The In-Laws (with Michael Douglas and Albert Brooks), The Punisher (with John Travolta and Tom Jane) and Hanelle Culpepper’s award-winning short, A Single Rose. Selected television credits include guest star and recurring roles in Greys Anatomy, Harry’s Law, The Defenders, The Nine, Boston Legal, CSI: Miami, Bernie Mac and Numb3rs. For more information, visit www.arussellandrews.com.