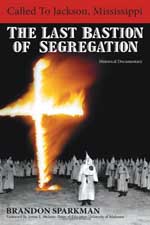 Shoals, AL (BlackNews.com) — Dr. Brandon Sparkman’s Called to Jackson, Mississippi: The Last Bastion of Segregation: a Historical Documentary, (published by iUniverse 2011), is a narrative of the excruciating execution of integration in Jackson schools. Written by the man who was superintendant of schools during that period, Sparkman’s narrative is clear, cogent, concise and intriguing.

The Civil Rights movement, from 1950 to 1980, witnessed the greatest conflict and turmoil America has known since the Civil War. The heart of this conflict centered on integration of public schools. Called to Jackson, Mississippi: The Last Bastion of Segregation is a three-year snapshot of this struggle that changed America forever.

Jackson, Mississippi, in 1970, was the last place Sparkman would have chosen to work, but an anonymous threatening letter lured him there. Sparkman recalls his quest to ensure a quality education for all students in Jackson, and to save the schools from complete chaos and destruction during the height of desegregation.

His book details how he regularly faced rebellious communities, hostile parents, disruptive students, defiant elected officials, unreasonable judges and the Ku Klux Klan. It describes how he confronted the most hated white man in Mississippi, how he courageously took the governor of the state to court while dismantling the last bastion of segregated schools. He accomplished this despite interference from his own assistants.

Presenting a firsthand account of an important pivotal moment in American history, Sparkman takes his readers behind-the-scenes of political maneuvering, clandestine meetings with adversaries, a face-to-face encounter with the Klan, and other personal and intriguing recollections.

The book is available on Amazon, Barnes & Noble, and at iUniverse.com (http://bookstore.iuniverse.com/Products/SKU-000469153/Called-to-Jackson-Mississippi-The-Last-Bastion-of-Segregation.aspx)

About the Author
Brandon Sparkman spent 35 years in public education serving as teacher, assistant principal, principal, assistant superintendent and superintendent in Alabama, Mississippi and South Carolina. He is also a writer, speaker, consultant and adjunct professor. Semi-retired, he and his wife, Anne, live in Muscle Shoals, Alabama. He can be contacted at buster14@charter.net

Sparkman is the former owner and CEO of an educational publishing company, and holds more than 125 publications in various trade books, magazines and instructional training materials.

Copies may be purchased, or ordered, through local booksellers, on-line retailers, or the publisher. It is available in hardcover, soft cover and ebook editions.