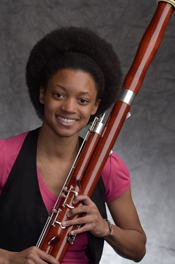 Chicago, IL – Chicago Sinfonietta, a professional orchestra focused on promoting diversity, inclusion, and innovative programming in the field of classical music, is pleased to announce the appointment of Sandra Bailey as Principal Bassoon for the coming 2015-16 season. Bailey won the appointment through blind auditions that took place on Wednesday June 10, 2015. Â She recently graduated from the Sinfoniettaâ€™s industry-leading professional development program, Project Inclusion.

Chen recommended Bailey apply for the Project Inclusion Fellowship while a freshman at Northwestern University. Previously she worked with Bailey as part of the prestigious Boston University Tanglewood Institute program in Massachusetts. Chen speaks about her time with Bailey,

â€œâ€¦During her time as a Fellow, my colleagues and I were pleased to witness Sandra’s growth and maturing musical personality on and off the stage. Â Sandra’s accomplishments on bassoon to date makes her an ideal example of Project Inclusion’s impact on the professional orchestral scene. The Chicago Sinfonietta is proud to have played an important role in helping Sandra find her true voice as an extremely gifted performer.â€

“I am honored that such experienced players have invited me in their music making,â€ Bailey commented. â€œI’m looking forward to giving my all. There’s nothing that can replace professional experience and I’m honored to have the opportunity. The Project inclusion program has allowed me the space to grow professionally, giving me the confidence to strive for my highest musical goals.”

Bailey will begin performing as principal bassoon in October as part of the 2015-16 season of the Chicago Sinfonietta. â€œAll of us in the Chicago Sinfonietta are thrilled and excited to continue working with Sandra in her new role as our new Principal Bassoon,â€ Chen states. â€œIt is with great pleasure that I congratulate her.â€

Sandra Bailey Sandra Bailey, 21, studies with David McGill at Northwestern University. In 2011 she won the Jack Kent Cooke Artist Scholarship, which gave her the opportunity to appear and perform on From The Top, a nationally syndicated radio show. With the guidance of From the Top staff, she has done musical outreach projects and fundraising performances with Christopher Oâ€™Riley, under hosts such as Joshua Bell and the WGBH Studios in Boston, Massachusetts. In the summer of 2012 she attended the Castleton Music Festival under conductor Lorin Maazel. She became a Chicago Sinfonietta member in 2013. In the summer of 2013 Sandra attended the Brevard Music Festival where she won the Jan and Beattie Wood Concerto Competition. She attended the â€˜Musik Akademie Westfalen 2013â€² under conductor Krzysztof Penderecki and recently the Orchestra De La Francophone 2014 under Jean Philippe.Â  She was one of three winners of the Evanston Music competition and was a finalist Northwestern University Concerto Competition, Skokie Valley Concerto Competition and Hellam Concerto Competition. She won second place in the national 2014 Meg Quigley Vivaldi Competition and was a first place winner in the American ProtÃ©gÃ© International Concerto Competition 2014, where she performed Hummel Bassoon Concerto in F Major in December at Carnegie Hall.

More about the Chicago Sinfonietta The Chicago Sinfonietta is a professional orchestra that forms unique cultural connections through the universal language of symphonic music. For over 27 years, the Sinfonietta has pushed artistic and social boundaries to provide an alternative way of hearing, seeing and thinking about a symphony orchestra.Â  Each concert experience fuses inventive new works with classical masterworks from a diverse array of voices to entertain, transform and inspire. The Chicago Sinfonietta performs five subscription concerts in both downtown Chicago at Symphony Center and in Naperville at Wentz Concert Hall. The Sinfonietta has a proud history of having enriched the cultural, educational and social quality of life in Chicago under the guidance of Founding Music Director Paul Freeman.Â  Mei-Ann Chen succeeded Paul Freeman as the Chicago Sinfoniettaâ€™s Music Director beginning with the 2011-12 season. In 2012 the Sinfonietta was honored with two national awards for excellence from the League of American Orchestras, one for adventurous programming and one recognizing Maestro Chen with the Helen M. Thompson Award for an Emerging Music Director.