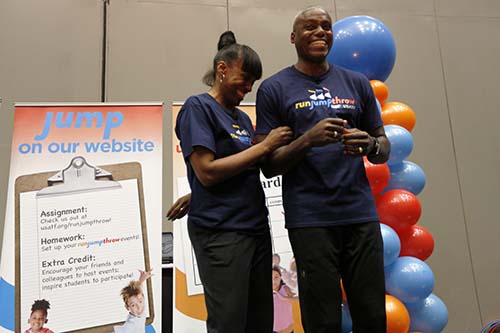 St. Louis, MO (BlackNews.com) â€“ USA Track & Field (USATF) and The Hershey Company today announced the launch of a national youth activity initiative as part of a new, seven-year partnership that features â€œRun Jump Throw,â€ an educational and learning program developed by USATF and Hershey. The new program will introduce kids ages 7 through 12 to the basic skills of running, jumping and throwing through track and field. HERSHEYâ€™S Track & Field Games, a youth track and field program launched in the 1970s, will transition to the national Run Jump Throw program in early 2015.

Launching in 2015, Run Jump Throw will use a curriculum developed by USATF. Kids around the country will have the opportunity to participate in fun, learning clinic-style events designed to build basic running, jumping and throwing skills and have fun exploring track and field. The program is the key piece of a larger partnership between USATF and Hershey that extends through 2020.

â€œThis new program is a true partnership of two great organizations,â€ said Bernie Banas, who serves as Hersheyâ€™s Vice President of Customer Innovation and HERSHEYâ€™S Track & Field Games board chair. â€œAs Hershey looked at how to expand the reach and impact of our long-standing commitment to youth activity through track and field, we were inspired by the legacy of our founder, Milton Hershey and his commitment to youth development through learning. Through partnering with USA Track & Field, we look forward to creating more learning opportunities and expanding the reach of our track and field program and the sport as a whole.â€

â€œWe are thrilled to bring Hershey on board as a long-term partner and are excited about the work we will do together in the youth activity space,â€ USATF Chief Executive Officer Max Siegel said. â€œWith Run Jump Throw, we are creating a foundational program for track and field as well as all activities and sports. Positively impacting culture and improving lives is something we aspire to achieve, and we couldnâ€™t be more proud to have Hershey as our partner in this effort.â€

Using the volunteer-based model that made HERSHEYâ€™S Track & Field Games successful since 1975, Run Jump Throw events will offer a participation-based model for organizers and participants. USATF will supervise the program. Fundamental skills taught as part of the curriculum will include warm-up, proper running technique for sprinting and distance running, jumping and throwing skills. The clinics will be followed by a â€œpractice meetâ€ for kids to apply their skills.

Children participating in Run Jump Throw will be encouraged to continue to pursue the sport, either through parks and recreation programs, school programs or through USATF clubs and associations.

As part of the partnership, Hershey will support a range of USATF programs. Beginning in 2015, Hershey will underwrite at least 1,000 youth scholarships to provide free USATF memberships to underserved children interested in pursuing track and field. Hershey will also serve as title sponsor for USATFâ€™s Youth Indoor and Outdoor National Championship Track meets, which collectively feature more than 5,000 young athletes with a wide range of abilities. The championships are hosted in different regions of the country each year to enable more youth and families to partake in national competition.

â€œHaving Hershey support our foundational youth programs will help us elevate and expand our outreach to young athletes,â€ Siegel added. â€œThis partnership will help ensure that underserved children have a pathway to success while providing an experience that generates happiness and inspiration.â€

The partnership with Hershey is USATFâ€™s second major, new partnership announcement in the last 14 months. In February 2013, USATF announced Neustar as the sponsor of the .US National Road Racing Championships. The new partnerships mark USATFâ€™s most active and successful sponsorship efforts in more than a decade.

About USA Track & Field
USA Track & Field (USATF) is the National Governing Body for track and field, long distance running and race walking in the United States. USATF encompasses the world’s oldest organized sports, some of the most-watched events of Olympic broadcasts, the countryâ€™s #1 high school and junior high school participatory sport and more than 30 million adult runners in the United States. For more information on USATF, visit www.usatf.org

About The Hershey Company
The Hershey Company (NYSE: HSY) is the largest producer of quality chocolate in North America and a global leader in chocolate and sugar confectionery. Headquartered in Hershey, Pa., The Hershey Company has operations throughout the world and approximately 15,000 employees. With revenues of more than $7.1 billion, Hershey offers confectionery products under more than 80 brand names, including such iconic brands as Hershey’s, Reese’s, Hershey’s Kisses, Hershey’s Bliss, Hershey’s Special Dark, Kit Kat, Twizzlers, Jolly Rancher and Ice Breakers. The company is focused on growing its presence in key international markets such as China, Mexico and Brazil while continuing to build its competitive advantage in the United States and Canada.

For more than 100 years, The Hershey Company has been a leader in making a positive difference in the communities where its employees live, work and do business. Corporate Social Responsibility is an integral part of the companyâ€™s global business strategy, which includes goals and priorities focused on fair and ethical business dealings, environmental stewardship, fostering a desirable workplace for employees, and positively impacting society and local communities. Milton Hershey School, established in 1909 by the company’s founder and funded by a trust administered by Hershey Trust Company, provides a quality education, housing, and medical care at no cost to children in social and financial need. Students of Milton Hershey School are direct beneficiaries of The Hershey Company’s success.

Photo Caption: Olympic legends Jackie Joyner-Kersee and Carl Lewis join USA Track & Field (USATF) and The Hershey Company in announcing the launch of a national youth activity initiative as part of a new, seven-year partnership that features â€œRun Jump Throw,â€ an educational and learning program developed by USATF and Hershey.