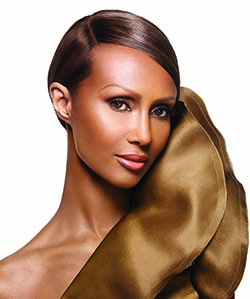 Iman, CEO & Founder of Iman Cosmetics, Skincare and Fragrances will be honored with the BRAG Legacy Award

New York, NY (BlackNews.com) — BRAG announced three exceptional honorees for the organizationâ€™s 43rd Annual Scholarship and Awards Gala. Terry Lundgren, Chairman, President and CEO of Macyâ€™s Inc., will receive the BRAG Business Achievement Award, and Iman, CEO & Founder of Iman Cosmetics, Skincare and Fragrances will be honored with the BRAG Legacy Award. Additionally, for the first time in BRAGâ€™s history, a graduate of the BRAG internship program will be honored. Alain Lafontant, who graduated from the internship program in 1996, went on to successfully ascend the ranks to become Vice President of Brand Development for Sean John. For his remarkable achievements, he will receive the BRAG Special Recognition Award. The black tie gala will be held at the Marriott Marquis in Manhattan on Thursday, October 17th, beginning with the cocktail reception at 6:00pm and program at 7:00pm.

With over 800 guests expected to attend this year, the annual scholarship and awards gala has become BRAGâ€™s marquee event. Each year as BRAG celebrates excellence in fashion and retail, it also awards scholarships to students who are interested in careers in the industry, have achieved academic success, and exhibit the financial need. As advocates for diversity in retail-related industries, BRAG serves as one of few organizations that offer guidance to high school students, college students and young professionals. To date, BRAG has awarded over $800,000 in scholarships to more than 400 students, and will award over 50 scholarships at the upcoming 2013 gala.

The scholarship and internship programs are essential components of the BRAG platform. This, coupled with the professional development programs implemented at 9 college chapters across the country, has allowed BRAG to successfully launch careers and provide well-needed finances for students to pursue their dreams. Since 1975, over 1,100 interns have participated in the BRAG program. Gail Monroe-Perry, BRAG President, states, “Our Internship programÂ and Scholarship Awards are important components of the BRAG structure. With strong sponsors and supporters of our mission,Â we have been able to leverageÂ our current partnerships to prepare, mentor and developÂ our interns to be leaders for the future.”

This year, Mr. Lundgren, Iman and Mr. Lafontant will be added to an impressive list of BRAG honorees including Magic Johnson, Tim Belk, Tracy Reese, Tommy Hilfiger, John Dempsey, Sean Combs, Naomi Campbell, Daymond John and June Ambrose. Ms. Monroe-Perry states, â€œIt is our privilege to have the opportunity to celebrate these outstanding individuals. Our honorees exemplify this yearâ€™s theme Imagine, Inspire, Ignite.â€ She adds, â€œWe are especially excited to honor one of our own intern graduates whose level of accomplishment is the perfect example of how BRAG is supporting the industry and its future leaders.â€

About BRAG
BRAG is a non-profit organization that prepares and educates professionals, entrepreneurs and students of color for executive leadership in the retail, fashion and related industries. For more than 42 years, BRAG has served as one of the rare organizations that offer guidance to high school and college students and young professionals entering the retail and fashion industries. As BRAG celebrates excellence in fashion and retail, it also awards scholarships to students who are interested in careers in the industry, have achieved academic success and who have exhibited financial need.

About Terry Lundgren
Terry Lundgren is Chairman, President and CEO of Macyâ€™s, Inc. In his capacity as chief merchandising officer, Lundgren was credited with effectively easing the merger of Federatedâ€™s and Macyâ€™s merchandising functions, and initiating the strategic development and marketing of a strengthened private brand program within Federated. As chief executive officer, Lundgren led Federatedâ€™s acquisition of The May Department Stores Company in August 2005, again nearly doubling the size of the company. Today, Macyâ€™s is a premier national retailer with more than 850 department stores in 45 states, the District of Columbia, Guam and Puerto Rico.

About Alain Lafontant
As a BRAG intern at Penn State, Alain LaFontant was placed at renowned retailer, Bloomingdales. Upon graduating with honors, his performance led to a job offer asÂ an assistant buyerÂ with the much-lauded institution. He quickly rose through the ranks, parlaying his experience there into a 5 year stint as Senior Account Manager and later, National Sales Manager at Sean John Clothing. Moving from one fashion powerhouse to another, Alain accepted a position as Vice President of Menâ€™s Sales at Jay-Zâ€™s clothing label, Rocawear. In this role, and after being promoted to President of the Juniors division, Alain used his expertise to implement new initiatives and strategies that grew the business exponentially. In 2010, Alain returned to Sean John, focusing on strategic planning and profitability in his role as Vice President of Business Development/Brand Manager.