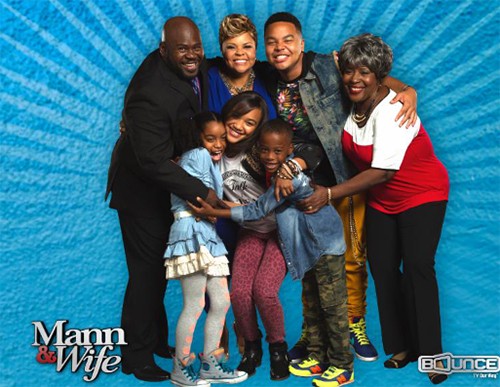 In Mann & Wife, the devoted couple draws inspiration from their real lives to play newlyweds Daniel and Toni Mann. The series follows the second-chance sweethearts as they laugh and love their way through the ups and downs of life as a blended family, each with two children from previous marriages.

“It was important to show our audience what a modern family looks like,” said David Mann. “We want to give a look at the African American family that’s positive, since there’s so much negative stuff out there.”

Life as they know it is turned inside out when Daniel, a police officer from Atlanta, and Toni, a school teacher from Dallas, meet on a dating site and fall in love. When they decide to marry and ToniÂ moves into Daniel’s house in the Atlanta suburbs, the honeymooners — along with their kids DJ, Tosha, Darren and Terri — all have to adjust to their new lives together. In addition to their expanded brood, they have to deal with David’s overbearing live-in mother and his jet-setting ex-wife.

“We want Black families to learn through watching our show to resolve conflicts through dialogue and agree to disagree, because family is all you have,” believes Tamela Mann. “Mann & Wife is more like our real life than any of the other projects that we’ve done. Â In our blended family, there’s no ‘his kids’ or ‘my kids’ — it’s just our kids, our family.”

In the series premiere, Daniel and Toni return home from an idyllic honeymoon and walk into comical chaos. Although Daniel’s mother, played by popular comedic actress JoMarie Payton, has been left in charge, all four of the children are bickering and finding it hard to get along. Meanwhile, Toni lands a substitute teaching job at the same school that DJ attends and Daniel is introduced to a new detective who will be his partner. The show tackles topics such as starting over, parenting and blended families with the humor, heart and authenticity that have made David and Tamela Mann popular family favorites in living rooms across America.

The ten-episode, half-hour series was conceived and co-created by David and Tamela Mann, the first scripted series for which they have earned an executive producer credit, along with co-creator, executive producer and series director Roger Bobb.

“Mann & Wife allows David and Tamela to show a new audience the incredibly funny, talented, loving and charming couple that they are in real life and that they portray in their characters on the series,” expresses Roger Bobb. “I feel honored and blessed to be able to showcase the talents of my good friends David and Tamela.”

“We are officially the go-to outlet for African American family-friendly original programming and so proud to be partnering with the Manns on Mann & Wife,” says Ri-Karlo Handy, VP of Original Programming for Bounce TV. “David and Tamela bring a loyal fan base, years of experience in television and a vision to bring back family programming. We’re supporting them 100%.”

Learn more and watch the trailer at www.bouncetv.com/shows/mann-and-wife/