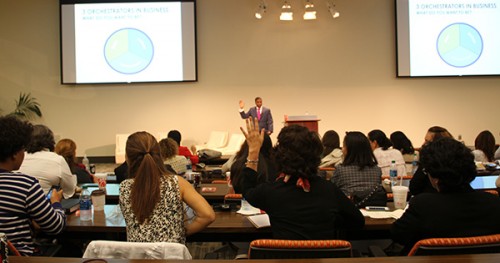 Nationwide (BlackNews.com) — On October 7th, 2015, hundreds of women gathered at the Chick-Fil-A headquarters in Atlanta, Georgia to attend the Womens Food Forum Entrepreneurship Bootcamp sponsored by Coca-Cola and Chick-fil-A.
Professor Devin Robinson, leader of the Self-Made CEO Movement, was one of the featured speakers in attendance of this amazing event. He is an 8-time author, economics professor, and founder of the Urban Business Institute a training/ development agency which creates and cultivates competitive, mainstream, minority entrepreneurs. He has also generated almost $15 million in revenue for businesses whose CEOs have received his training and consultation.
During the conference, Professor Devin made his contribution to the event by using his entrepreneurial acumen and experience as well as his awareness of minority disadvantages in business to inspire and educate the attendees. At one point Professor Devin stated to the group of women: 78% of all companies that are successful for 5+ years have a female on their leadership team.
Along with the information that they received from the Entrepreneurs Bootcamp, all attendees were given a free copy of Professor Devin Robinsons book, Power M.O.V.E: How to Become a Successful Self-Made Entrepreneur.
Alongside Professor Devin Robinson was legendary media specialist and founder of the Adelante Movement, Nely GalÃ¡n. GalÃ¡n is well-known for becoming the first Latina President of Entertainment at Telemundo, producing over 600 television episodes for a variety of genres, and launching 10 television channels in Latin America. She has also had success in the commercial and residential real estate industries.
With her experience in entrepreneurship, by way of real estate and media, GalÃ¡n shared information regarding financial and business acumen, branding, and marketing with the women in attendance.
The event was coordinated by the Womens Foodservice Forum, which hosts multiple entrepreneurial events annually across the country. WFF has been in existence for 25 years and has helped women excel in the restaurant industry.
For more information regarding future Entrepreneurial Boot Camps, visit www.WomensFoodserviceForum.com.