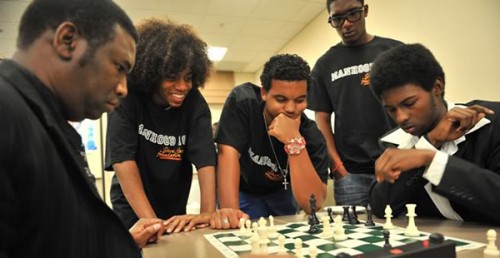 Nationwide (BlackNews.com) â€“ Â Orrin Hudson, founder of Atlanta-based non-profit organization Be Someone, says he is on a mission to teach teens how to survive police brutality and how to best interact with law enforcement officers. Via his online fundraising campaign, he is currently raising funds to bring his “Police Brutality Survival” workshops to Baltimore, Ferguson, Atlanta, and potentially other cities.

Hudson is a chess champion, and will use the game of chess in his free-to-the-public summer camps to teach teens how to think ahead before making decisions. The camp will tackle the very delicate issue of police brutality survival, the do’s and don’ts of safe police/citizen interaction, critical thinking to forecast the consequences of actions, and so much more.

Other topics to be addressed during the summer camp are:

Hudson recently told Fox News, “The young people of Baltimore are not thugs. They are potential champions. I know because I was once in a gang and called a thug.

He continued, “One thing that strikes me is that while many people have a lot to say, most do not offer solutions. Most don’t have any idea how to fix the underlying problems. It takes a very special person – one who can see the world through both the officer’s eyes, and the at-risk youth’s eyes.”

On Saturday, May 30th, from 1pm to 4pm, Hudson, will kick off his first summer camp in Atlanta at the Fairfield Inn and Suites at 7850 Stonecrest Square, Lithonia, Georgia. Both parents and their children are invited to attend for free.

“All that is required for our communities to be destroyed is for good people to do nothing. We must get in the game and give what we can,” he says.
To make a donation online to Hudson’s “Police Brutality Survival” summer camps/ workshops for teens, visit:
www.gofundme.com/besomeone

To learn more about his Be Someone non-profit organization, visit:
www.BeSomeone.org

Photo Caption: Orrin Hudson, founder of Be Someone, teaching teens how to make better decisions in life