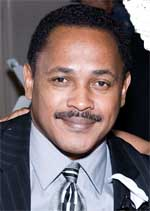 Los Angeles, CA (BlackNews.com)– Hope In Heaven and Faith For Today, written by Dr. Lawrence Foy, amplifies the African American belief in the coming Kingdom of God and how this anticipated and promised future fuels their present quest for equality, freedom, justice, reconciliation, and global peace. The author states that “Heaven is not mere ‘pie-in-the sky’ or ‘otherworldly’ thinking. Rather, the Christian hope in heaven and the anticipation of the coming Kingdom of God, at God’s full self-disclosure, are infiltrating the present…”

The book encourages people to not fear being “left behind” to endure a world of chaos and calamity, but rather that we should look up and around where we will be brought into God’s new community of love, justice, freedom, and unity. The year 2012 should not be fraught with doom and gloom, but viewed as a new beginning and opportunity to engage and build a world where all people live with dignity and self-sufficiency.

In his foreword to Hope in Heaven and Faith for Today, Cecil “Chip” Murray, Tanzy Chair of Christian Ethics, University of Southern California states: “Heaven equates with hope. Black women particularly thrive in that Kingdom, the writer points out, for they must persist not only in a race-based culture, but in a male dominated culture. They persist, even as all Blacks endure, in realizing the hope that present conditions are not permanent conditions…”

For more information and to obtain a copy or E-book edition, go to: www.cocoa-nla.org

Lawrence Foy is an African-American theologian, Baptist minister, and social activist. He has served as a faculty member at Westmont College, Elmhurst College, and Northern Baptist Theological Seminary. He is co-founder of COCOA-NLA, a non-profit faith based advocacy organization, and is a native of Louisiana but currently residing in Los Angeles, California.

Blacks and Hispanics Struggles: Where is Our Place in the American Dream?

Letting Demons do Battle With Demons