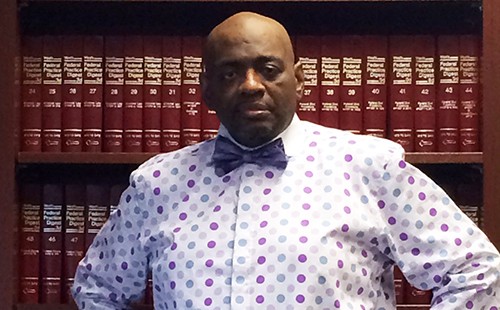 Prince George’s County, MD (BlackNews.com) — Today, Monday, May 11, 2015, in the Circuit Court for Prince Georges County Maryland, the Plaintiff, Jimmy A. Bell, Esq., filed a lawsuit against Defendant International House of Pancakes, LLC or (IHOP) and Defendant Hospitality Management of Capitol Heights, Inc. (a.k.a.) IHOP franchise for color and race discrimination and Negligence (failure to train and failure to supervise) its employees/agents.

The lawsuit seeks compensatory and punitive damages to be determined by a jury.The lawsuit asserts that:

2. That Mr. Bell knew based on their store hours posted on the internet and their front door that this IHOP location did not close until 11pm.

3. That when Mr. Bell walked in, there were many people in one section of the restaurant. That Mr. Bell stood and waited at the podium in the front for three to five minutes.

6. That the manager replied, We”re not serving dine-Â­â€â€‘in. Only carryout.

7. That Mr. Bell then said, With all these people in here, they are still ordering. I’m just one person.

10. That Mr. Bell then said, So what you did was just commit a crime, because you held yourself out to be a lawyer. And in Maryland, in order to be a lawyer, you must be licensed to practice law in the State of Maryland. And you are not. You just admitted that you are not. So please write down on a piece of paper, your name, title and why you denied me dine-Â­in sit down service and a name and number to allow me to talk to a supervisor of yours, because this conversation between you and me is not going to be fruitful. That as the manager was leaving to go to the register, he grunted You darkeys always trying to get over on something.

11. That as a 46 year old man, Mr. Bell knows the customary and historical usage of the word darkey. That darkey is a disparaging term for a black person, a racial slur. That as far as Mr. Bell and many Americans of good conscience are concerned, calling someone a darkey is essentially the same as calling one a nigger.

12. That the manager in calling Mr. Bell a “darkey”, as he was denying Mr. Bell dine-Â­in sit down service -Â­ was behaving in a racially derogatory, highly offensive manner at a public accommodation.

14. That Mr. Bell, who has been an advocate for so many others who have been confronted with various forms of discrimination, knew at this point that he himself was being was being discriminated against. He realized that he had been denied sit down service because of his skin color (dark skin)/race (black).

15. That the store manager only provided Mr. Bell with a handwritten note containing his name, the store number, and a brief statement admitting that he told Mr. Bell he was a lawyer and he was bared in Florida.

16. That Mr. Bell then asked a customer who a little ways behind him, Did you just hear that? That the customer said, Yes. That Mr. Bell asked the customer if he would be willing to provide Mr. Bell with his contact information. That the bystanding customer declined, saying, I don’t want to get involved in this.

That the representative was not sympathetic to Mr. Bell’s complaint, and the conversation ended before Mr. Bell was able to mention that the manager had discriminated against him and denied him service because of his skin color.

19. That on the following day, Friday, March 13, 2015, Mr. Bell talked to Max Pinneda, the regional manager of IHOP and detailed to him what had occurred and asked him to watch the video tape and see for himself what happened and to investigate if the manager has been denying other blacks in this majority black area from dine-Â­in sit down service.

22. That Mr. Bell explained to Max Pinneda the historical discriminatory context of restaurants telling blacks patrons that they may order takeout but could not sit down to eat and that the above-Â­â€â€‘described discrimination was an instigating force behind sit-Â­â€â€‘ins during the civil rights movement.

23. That Mr. Bell asked Pinneda if he could name one IHOP in a majority white area where white customers are told that they can order carryout but they cannot sit down and eat in the IHOP restaurant.

24. That Pinneda, stated that he could not think of such an IHOP.

25. That according to the job description of a server as described in the very own words of IHOP, the main job responsibility is to provide customers with a hundred percent customer service excellence. That according to an IHOP public job opening ad, servers are basically in the front line since they will be the one welcoming and serving the customers. That the IHOP job ad also says, As long as you have the right attitude and you are at least sixteen years of age, you can qualify for a Server position at IHOP.

27. That, according to the Operating Procedures and Standards, if an IHOP Restaurant is not open for business during the required hours, the Regional Vice President must be notified of the reason for closure of the Restaurant.

29. That the actions of Defendants -Â­ in failing to follow Maryland law anti-Â­discrimination law and their own company policies regarding dine-Â­â€â€‘in sit down service followed by intentionally concealing this error in the form of an unwritten policy – clearly demonstrates malicious intent, discriminatory intent, and ill will.

30. That Mr. Bell explained to Max Pinneda, the area manager, that IHOP in calling Mr. Bell a darkey and denying sit down service to him and other black patrons, especially at an IHOP franchise located in a predominantly black community amounted to gross discrimination and created a very hurtful experience to Mr. Bell, insulting his dignity and self worth. That Mr. Bell explained that if left unchecked, the actions of IHOP could lead to greater discrimination. That Mr. Bell also reminded Max Pinneda that on their website, IHOP states, We value the communities in which we do business… That Mr. Bell asked Max Pinneda how IHOP could possibly value this majority black community if it treats the customers as if they were living in the 1950s.

31. That Mr. Bell asked Max Max Pinneda what was worse: the manager calling Mr. Bell a darkey or treating him like one. That Pinneda had no response.

32. That Pinneda stated that he would talk to the manager again but that the manager was going to remain employed by IHOP as a manager at that same location. So, the Defendants ratified the managers behavior, according to the lawsuit.

33. Mr. Bell asked Mr. Pinneda for the name and telephone number for the owner of Defendant Hospitality Management of Capitol Heights, Inc. (a.k.a.) IHOP and Mr. Pinneda told Mr. Bell that he had talked to the owner (Geoffrey Trout, a white man) and kept him informed about the situation and the he, Mr. Pinneda, speaks for the owner in this matter.

34. That Mr. Pinneda then offered Mr. Bell a few coupons for free meals at IHOP. That Mr. Bell declined the coupons and informed Pinneda that he would be filing a discrimination complaint against IHOP.
For more information about the lawsuit, contact:
Jimmy A. Bell, Esq.
(301) 661-1165