Baltimore’s youth are champions, not thugs (they just don’t know it yet!) – an open letter to President Barack Obama 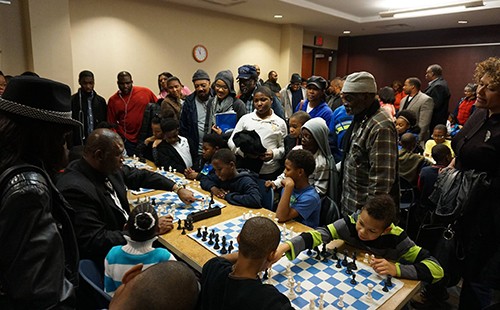 Nationwide — Dear Mr. President, I need your help and together I know we can make a positive difference in the lives of many young people who feel their country has passed them by – kids who see no future for themselves.

I am a former state trooper, Air Force veteran, and winner of the FBI Leadership award who believes that evil prevails when good people do nothing. I started Be Someone, Inc. to teach youth that if they make just one bad move in life, they may never recover. They must think things through. I know this lesson firsthand. I was one wrong move away from a failed life until a teacher saw the potential I didnt see. I believe he saved my life and that is now my mission in life… Saving young people from the consequences of wrong moves.

Mr. President, the young people of Baltimore are not thugs. They are potential champions. I know because I used to be in a gang and called a thug. The gang called the shots for me… Do this, do that. And I complied because I let someone else do my thinking for me. It almost ruined me.

Thank God that one of my teachers knew I was much better than that and brought out the champion in me that I never knew existed. He taught me chess. He taught me there is a consequence for every action. He taught me success is mine to achieve if I make the right moves. Now, I want to go to Baltimore and teach this same vital lesson.

Mr. President, I know these young people. They are begging for a chance. They want to be happy and successful and raise families just like you and I have had the privilege to do. Please join me in Baltimore. If you like, I will meet you first in Washington. Lets break out the chess table and let these young people know they can be champions! We need each and every one of them.

I have beaten the odds as the first African American to defeat the Alabama State champion in chess, and I have coached students who have never had a chess tournament to win three straight Atlanta Public School chess championships and one statewide chess championship.

My message is: Peace before violence; Brains before bullets; Think it out, Dont shoot it out; Push pawns, not drugs; Heads up, pants up, grades up, and Never ever give up!

Orrin Checkmate Hudson is the Founder and CEO of Be Someone Inc., a non-profit organization that uses numerous tools, including the game of chess to promote self-esteem, responsibility, and analytical thinking among at-risk kids. For more details and/or to schedule him to address youth and adults in your city, call (770) 465-6445 or visit www.BeSomeone.org