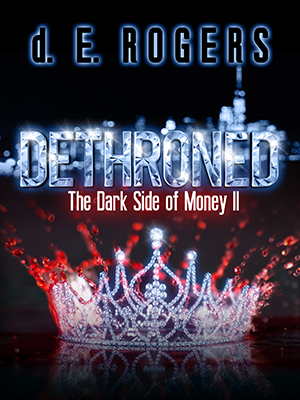 New York, NY (BlackNews.com) â€“ Â Dethroned: The Dark Side of Money II, the second book in the d. E. Rogers’ series, will be released on April 18, 2015. It is the highly anticipated follow-up to the bestselling novel The Dark Side of Money. Dethroned (ISBN: 9780970880871) takes off where part one ended with the Dean family fighting each other for power over The Gloria Dean Company, one of the largest fashion companies in the world.

Set in New York Citys fashion world, the sequel follows the dark side of the Dean Empire after Jaymee Dean has unseated her mother as the new Queen of fashion. Not wanting any part of a truce with her mother or sister, a war breaks out for control. But once Jaymee becomes a suspect in the death of a family member, Gloria Dean goes all out to get revenge. With the crown up for grabs everyone comes out to claim it. At the end, only one will be crown the Queen of fashion, but even that coronation might lead to death.

“Dethroned is filled with colorful and dark characters, intrigue, murder, and a great storyline,” said Rogers. “The dramatic journey of the Dean family is similar to most families, except for the wealth and power they possess. Since the release of The Dark Side of Money, I’ve seen many shows like Power and Empire pop up with similar storylines, but in my opinion they both come up short in depth of their characters and plot. Dethroned is a thrill ride. Nothing compares to it.”

d. E. Rogers is the author of eight previous novels, White Lie, Color Line, Just Like Your Daddy, I Know She Didnt, Crossing Color Lines, Counterfeit Friends, Forgetting U Existed, and The Dark Side of Money. He holds a bachelor’s degree from Purdue University and an MBA from Bethel College. Born in South Bend, Indiana, he currently lives in the San Francisco Bay Area. Dynasty: The Dark Side of Money III is expected to be released at the end of 2015. For more information about d. E. Rogers and his books, please visit www.derogers.com.

Dethroned: The Dark Side of Money II is now available at www.amazon.com/Dethroned-d-E-Rogers/dp/0970880871/