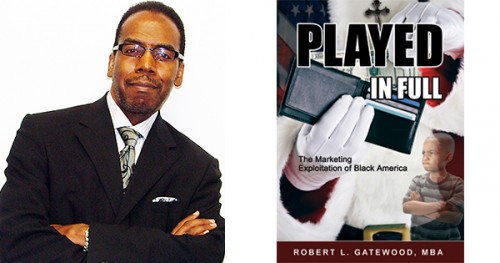 Nationwide (BlackNews.com) — If youve ever wondered why Black America, with its trillion dollars of spending power, cant hang on to its money, then you are in the company of Robert L. Gatewood, author of the provocative book, PLAYED IN FULL The Marketing Exploitation of Black America.
Gatewood, who is an MBA-degreed marketing consultant, and host of the acclaimed Marketing Pulpit Radio Show on Radio-Ones WOL in Washington, DC, considers himself the unlikely poster boy for Black overspending. He adds that, in the past, he too spent well beyond his means. According to Gatewood, If a smart guy like me has struggled over the years to hang onto his money, then perhaps theres more to this problem than basic math.
Gatewood adds, The forces at work ring familiar because they are some of the very same techniques used by experienced marketers that are designed to help business owners. Unfortunately those methods have been twisted and used nefariously. When the history of slavery and racism is embedded, the subjection becomes particularly acute for Blacks.
Gatewoods book, PLAYED IN FULL The Marketing Exploitation of Black America, suggests that the fight for Black dollars is a generational battle thats fought in the mind. On one side you have Black consumers who have been conditioned to spend rather than invest. And coalesced on the other side are the Players, people and institutions, who are possessed with a congenital zeal for extracting money from Blacks.
Its worse than shooting fish in a barrel, says Gatewood. Its as if the fish were trained to jump out of the barrel, gut themselves, leap into the frying pan, and then light the fire.
In the book, Gatewood exposes many sacred institutions that have wittingly or unwittingly contributed to the subterfuge; including but not limited to, the banks, the courts, the media, the schools, the military, the church, the state, the food industry, the politicians, and even Santa Claus himself.
In addition to highlighting the dilemma, Gatewood also provides a host of remedies for mending the sieve that is the pocketbook of Black America.
To learn more about the book or Robert Gatewood, visit www.playedinfull.com, www.robertgatewood.com, email gatewood@playedinfull.com or call 301-839-2836.