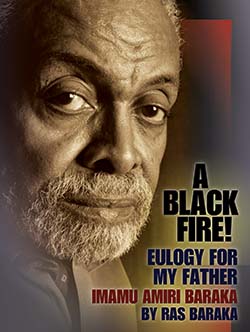 â€œWe are excited to publish A Black Fire!,â€ says BCP Director Paul Coates. He continues, â€œRas Barakaâ€™s rhapsodizing tribute follows the tradition of his father, who was an extraordinary master of presenting eulogies as praise songs. Amiri Baraka honored the famous and well known, such as James Baldwin, and John Coltrane. He also honored lesser known individuals, including friends and relatives. One of Barakaâ€™s more moving eulogies was for his daughter, Shani, who was tragically killed.â€

â€œIn that audience with three thousand other people,â€ says Coates, â€œI was transfixed. Rasâ€™ delivery was a spiritual combination of poetic humor, sarcasm, irony, passion, and praise, bestowed rhythmically on his father, just as Amiri had done for so many others.â€ Coates continues: â€œHe captured for all of us, the struggles and energy that his father represented to African Americans and people worldwide. His eulogy energized the room and seemed to make it ok that Barakaâ€™s spirit had moved on. I knew in my heart that this dynamic praise song had to be published.â€

The print edition of A Black Fire! is available from leading retail and online bookstores and directly from the press at www.blackclassicbooks.com for $5.95 (paperbound, 26 pages.) The e-book edition is available in Kindle format at Amazon.com for $2.99.

About Ras Baraka
Ras J. Barakaâ€™s parents are the renowned poets Amina and the late Amiri Baraka. Ras is the father of three daughters. His latest published work is Black Girls Learn Love Hard, and is dedicated to the life of his late sister, Shani Baraka. He is running for Mayor of Newark in the 2014 election.