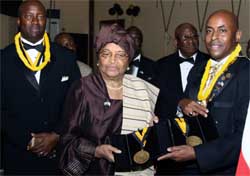 Baltimore, MD (BlackNews.com) — In a ceremony in Monrovia, Liberia, Alpha Phi Alpha Fraternity gave Liberian President Ellen Johnson Sirleaf its Alpha Award of Honor. The award is the highest accolade presented to a nonmember of the fraternity. Ms. Johnson Sirleaf also was given the first ever Martin Luther King, Jr. Peace Medal by the fraternity.

The awards were bestowed Jan. 19, at Paynesville Town Hall, during a rechartering ceremony of the Eta Epsilon Lambda Chapter. Johnson Sirleaf is the third Liberian president to receive the Alpha Award of Honor.

“This is a very special evening. I am proud to see the brothers of Alpha Phi Alpha return to Liberia,” said Johnson Sirleaf. “We believe that this is just another example of the Alpha culture, the Alpha spirit.”

An economist, Ms. Johnson Sirleaf, 73, is a graduate of the University of Colorado and Harvard University. A member of Alpha Kappa Alpha Sorority, she is credited with breaking down many gender barriers in her country and has been lauded all over the world as a powerful and stabilizing force for Liberia.

In 2005, Johnson Sirleaf made history when she became Africa’s first elected woman head of state. In 2011, she shared the Nobel Peace Prize with two other women “for their non-violent struggle for the safety of women and for women’s rights to full participation in peace-building work.”

Last year, voters returned her to office. Her second inauguration was held Jan. 16, making her the first Liberian president to have a second term in the first successive, peaceful democratic transition in 20 years.

“What an honor to be in Liberia to witness President Johnson Sirleaf’s second inauguration,” said Herman “Skip” Mason, Jr., Alpha general president. “And, to present her with an honor named for our most iconic member and an international humanitarian for peace worldwide, Brother Dr. Martin Luther King Jr.”

“Her work, ensuring the rebuilding of Liberia, supporting the Liberian Educational Trust and her leadership in stopping violence against women, are very much in line with the tenets of Alpha Phi Alpha. We salute President Johnson Sirleaf and are honored to present her with these well earned awards and recognition,” Mason said.

The first Alpha chapter in Africa was established in Monrovia on Oct 6, 1958. David N. Howell, former CEO of the Liberia YMCA and 17 Alpha brothers were designated by the international leadership to establish Eta Epsilon Lambda Chapter there. A second chapter, Kappa Phi Chapter, was established at the University of Liberia and Cuttington University in 1976.

To view more photos of this event and it’s highlights, visit http://smu.gs/wM8G5b
Â

Founded on December 4, 1906, at Cornell University in Ithaca, NY, Alpha Phi Alpha Fraternity, Inc., has continued to supply voice and vision to the struggle of African Americans and people of color around the world. The fraternity has long stood at the forefront of the African-American community’s fight for civil rights through Alpha men such as Martin Luther King Jr., Adam Clayton Powell, Thurgood Marshall, Andrew Young, Edward Brooke, Cornel West, Lionel Richie, John H. Johnson, Paul Robeson and Jesse Owens among many others. The fraternity, through its college and alumni chapters, serves the community through more than 600 chapters in the United States, Europe and the Caribbean. Visit www.apa1906.net and follow on Twitter @apa1906network.