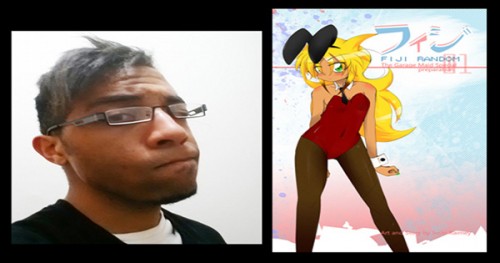 This peculiar garage sale features a scatterÂ­brained mom in a helpful French maid costume, a 16Â­ year-Â­old girl dressed in her mother’s rather risquÃ© bunny suit, and another teenage girl sporting cat ears. And as if this maidÂ­themed garage sale isnt odd enough, Fiji has to fend off a creep who wants to purchase her bunny costume for his own questionable enjoyment.

Fiji Random‘s comedic storyline is further driven by artist Justin Raimey’s distinctive art style, which fuses Japanese mangaÂ­style art with the American art style that most comic readers are familiar with. The allÂ­female cast of characters within this title are multiÂ­-dimensional and their actions and dialogue are very unpredictable. Despite the adorable appearance of Fiji Randoms cast of characters, this titles humor is PGÂ­13 in nature, which adds unexpected shock value to the story itself. Fiji Random Garage Maid Special 01 Preparation is available from the publisher at blackstreakstore.com and is recommended for readers ages 12 and up.

About Black Streak Entertainment
Black Streak Entertainment seeks to do what modern-Â­day mainstream youth entertainment refuses toÍ¾ that is, to represent kids and teens of color through creating appealing characters and storylines that shatter stereotypes and encourage people to think outside of the box. In a world bombarded with monopolized popÂ­ culture and overÂ­exposed brand names, founders Justin and Terry L. Raimey also seek to bring more variety to the world of comics, teen fiction, animation, and licensed youth productsÍ¾ variety in the cultural appearances of characters and storylines that are relatable to American minorities from all socio-economic classes.